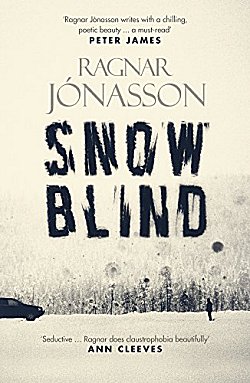 First Line: The red stain was like a scream in the silence.

Rookie policeman Ari Thór Arason and his girlfriend Kristin live in Reykjavik where Kristin is in medical school. Openings for police officers are few and far between, so when one occurs in the remote northern village of Siglufjörður, he takes it without asking Kristin's opinion.

He finds himself in a small village accessible only by sea or by a small tunnel through the mountains. Everyone knows everyone else. Secrets are kept closely guarded. It's dark twenty-four hours a day, and Ari is having a difficult time adjusting.

Then a young woman is found unconscious and bleeding in the snow, and a famous writer falls to his death in the local theater. Ari is at the heart of a very complex case. The darkness seems absolute, and the snow is so unrelenting that an avalanche cuts the village off from the outside world. This rookie policeman must find the killer before anyone else dies.

Snowblind, the first of Ragnar Jónasson's Dark Iceland trilogy, is blessed with the three most important ingredients of an excellent mystery: a vivid setting; a strong, interesting main character with a few problems of his own; and a complex and sometimes frightening mystery.

Girlfriend problems aside, Ari proves to be a very likable (if impulsive) young man who has good instincts for putting random bits of information together. Tómas, his boss, is a bit too blinded by the way things have always been in the village, but although he's often exasperated with Ari, the older man does see the rookie's potential.

The mystery involves both past and present, and it kept me guessing throughout the book, but the icing on this cake of murder and mayhem is the setting. Jónasson uses his remote Icelandic setting to wonderful advantage. Between the endless darkness, never-ending snow, and being cut off from the rest of the world, the claustrophobia is palpable--probably the best use of setting I've read so far this year.

If you like Nordic Noir, you definitely need to get your hands on Snowblind. I did, and then I immediately bought the second book in the series, Nightblind.