Dead Is Better by Jo Perry 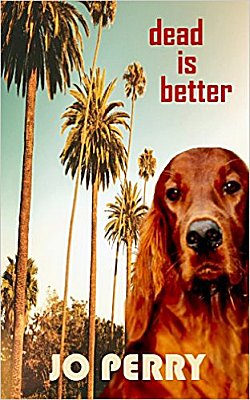 First Line: All I know is that I know.

Charles Stone assumes he's dead. He's just woken up in the afterlife with a chest full of bullet holes, and his only companion is a dog whose death seems to have been from malnutrition and abuse.

He names the dog Rose. Why not? The dog is the only one he can communicate with, and it looks as though the two of them have nothing to do and all the time in the world to do it in.

Then Charlie decides to try to find out why he was killed and uncovers a criminal who's making millions by cruelly exploiting-- and sometimes killing-- his victims. But if Charlie and Rose can't communicate with the living, how are they going to bring this person to justice?

Jo Perry's novel got under my skin and just wouldn't turn me loose. Dead Is Better (the title is a partial quote from Stephen King's Pet Sematary) unfolds in short bursts, like someone who's found an old-fashioned projector, screen, and a carousel of slides and is clicking his way through them. It's a pace that takes a few chapters before it becomes comfortable, but it does.

Charlie continually describes himself as unlikable, but readers soon learn that his actions prove that to be a lie. It's this unveiling of Charlie's true character that makes us want to find out why someone would want to kill him. And Rose? Just as we learn about Charlie, we can see that she's more than just a dog-- but neither is she a canine angel nor Lassie.

Something I seldom mention but feel I have to do so here is the appalling lack of proofreading in this Kindle version of what is an imaginative and well-written book. Many misspelled words and grammatical errors kept jerking me back to reality when I wanted to stay immersed in Perry's story.

The paranormal angle was interesting and well-done. Do Charlie and Rose bring the killer to justice? I will spill the beans and admit that they do, but what I won't tell you is how they do it. Very nice-- and I'm looking forward to reading another book featuring these two characters (even if one of them cannot speak)!