The Shadow Collector by Kate Ellis 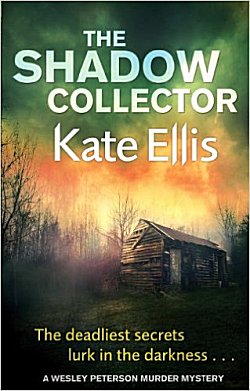 First Line: She had no face.

Almost twenty years ago, suspected witches Lilith Benley and her mother were convicted of the brutal murder of two teenage girls. Now Lilith's mother is dead, and Lilith has been released from prison to return to her old home.

Shortly after her return, a young woman's body is found on an adjacent farm where a reality TV program is being filmed. When Detective Inspector Wesley Peterson is brought in to investigate, he quickly learns that he has to deal with fragile egos, secrets, and the possibility that Lilith Benley has killed again.

While Peterson is looking into a murder, his friend, archaeologist Neil Watson, finds a creepy wax doll inside the wall of a house that once belonged to a woman hanged for witchcraft around the time of the English Civil War. When Neil is involved in a near-fatal accident, it's almost impossible not to look at that doll and think there's a supernatural connection.

I've been happily reading this series, book by book, since the very first one, The Merchant's House. Kate Ellis's Wesley Peterson mystery series is such a wonderful blend of character, setting, history, and crime that I wouldn't dream of missing a single volume. By this, the seventeenth book, Wesley's team at the Tradmouth (Dartmouth) police station is a well-oiled machine. They know each other extremely well-- each other's strengths and weaknesses, senses of humor, facial expressions, the works. You might think that this is a drawback to reading a long-running series, but it's not. It's like coming home, or putting your feet into a favorite pair of slippers. It's always a pleasure to see this group get down to work to solve the latest crime-- and since they're always having things happen to them in their personal lives, the series stays fresh.

In The Shadow Collector, Wesley and his wife are having problems with one of their children. Ellis has used Peterson and his family more than once to highlight how difficult it can be to have a personal life outside of such a demanding job, and she does it very well.

The highlight of any of these books is what the historical angle will be because Ellis always blends a present-day crime with something from centuries past. This time it's witchcraft from the time of the English Civil War, most of which is done with alternating journal chapters from two different historical characters. There's always a sad inevitability to charges of witchcraft, most of which seemed to have been brought on by malice, envy, and greed. Neil has a larger role in this book, and I enjoyed that. His archaeological digs can be relied upon to be fascinating and to add a great deal to the story.

As for the mystery, it's top notch-- one of those puzzlers that I could partially figure out yet still be surprised by the reveal. If you like well-drawn characters and first-rate mysteries with a touch of history, you can't do better than Kate Ellis's Wesley Peterson books. If you're worried about starting such a long-running series, it is possible to start anywhere without feeling completely lost. Ellis does a good job at quickly filling in any necessary backstory. Whatever you decide, I hope it's to give the books a chance. This is a series that I recommend highly-- and I've been doing it for several years now!