The Madwoman Upstairs by Catherine Lowell 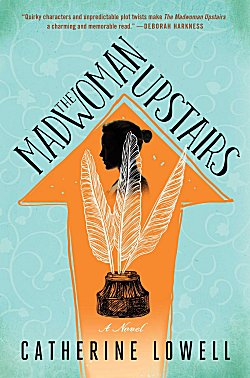 First Line: The night I arrived at Oxford, I learned that my dorm room was built in 1361 and had originally been used to quarantine victims of the plague.

As the last surviving descendant of the Brontë family, Samantha Whipple is used to stirring up controversy and speculation. Even she believes there's some truth to the rumor of a large secret Brontë estate waiting only for her to put her father's clues together with the Brontës' own novels to find it.

When Samantha enrolls at Oxford, the dilemma about that estate takes on a whole new meaning. Books that should have perished in the fire that killed her father mysteriously turn up in her room. Only her professor seems able to help in deciphering the cryptic clues her father wrote in the margins of the books. Will Samantha be able to decode the messages and find the Brontë "treasure"?

I have long been a fan of the Brontës, so when I learned of Lowell's novel that combines this storied family with a treasure hunt, I couldn't resist. I'm glad I didn't.

The first-- and most important-- thing to draw me into The Madwoman Upstairs was the character of Samantha Whipple herself. I loved her sarcastic voice. Having been homeschooled by her eccentric father, she's much different from the usual sort of student, and when she's being questioned by her Oxford professor, her responses are often quite funny. The Brontë treasure that Samantha is searching for so diligently is both a literal and a figurative one, as she learns quite a lot about herself in the process.

As for that brooding Professor James Orville, his identity is a mystery until the end, although fans of Jane Eyre will be able to see where the relationship between professor and student is going.

I'm also happy to say that the Brontë angle was fascinating and the life's blood of the story. Lowell brings up many of the personality traits of Charlotte, Emily, and Anne that I'd already read about, incorporated them seamlessly into the story, and added quite a few insights into their novels. However, the thing that pleased me the most was that the least-known of the Brontë sisters, Anne, is the one who had the most prominent role in The Madwoman Upstairs. Not only does this give freshness to Lowell's story, it also gives Anne some of her due-- at least to me. All those years ago when I read Wuthering Heights and Jane Eyre, I didn't like Emily's novel at all, and I really liked Charlotte's. But when I read The Tenant of Wildfell Hall, I knew Anne was the best of the three sisters even though she had to live in the shadow of the other two.

Are there problems in this book? Yes. Items being hidden where they could be destroyed by the weather. The tricky issue of provenance. The idea of the treasure hunt itself when no one else really seemed to be after it. But I could overlook those things because Lowell's story and characters were so strong that I was spellbound, and when you're spellbound, it's easier to cast a detail or two aside. After the pleasure The Madwoman Upstairs gave me, I'm looking forward to Catherine Lowell's next book.