The Case of the Dotty Dowager by Cathy Ace 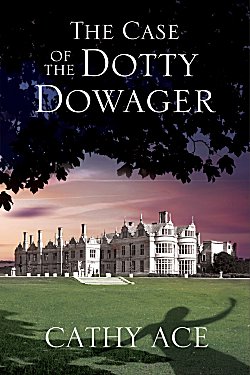 The dowager duchess has to be losing her marbles. At least that's what her son, Henry Twyst the eighteenth Duke of Chellingworth, believes. His mother insists that she saw a corpse lying on the dining room floor, but the only evidence she has is a bloody bobble hat.

Twyst retains the women of the W.I.S.E. Enquiries Agency to explain the whole thing away, but once these ladies are on the Chellingworth Estate in Wales, they find they're involved in a case that's much more complex and dangerous than anyone could have imagined.

Why the W.I.S.E. Enquiries Agency? Carol is Welsh (and since she's pregnant she's put in charge of the command center in London); Christine is Irish (and with her wealthy background, she's perfect for dealing with aristocrats); Mavis is Scottish (and a former nurse); and Annie is English (and not only English but a  Cockney). Put their nationalities together, and you've got the name of their agency. Not a bad idea, eh?

Cathy Ace has gathered together four women who have the personalities, skills, and blind good luck to carry off an enjoyable series. For this first book she's also come up with a brilliant mystery involving Waterloo teeth. I knew nothing about these teeth, and I certainly do enjoy learning things while I read.

But while the cast and the mystery are first-rate, the method of delivery fell short for me. I couldn't really immerse myself in the story because most of it was told to me instead of shown. Instead of following along with the characters, becoming accustomed to their voices, and learning things as they learn them, we're told about almost all of it, and that puts a distance between reader and story.

If "told not shown" doesn't bother you, The Case of the Dotty Dowager should be your cup of tea. The book certainly has a lot going for it. As for me, I'm undecided on continuing with the series.