The Blood Strand by Chris Ould 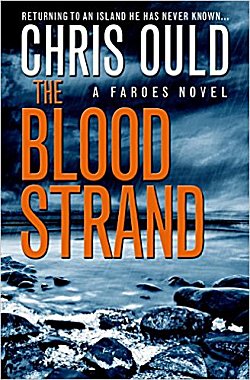 First Line: By the time Heri Kalsø had paid for his coffee, Annika Mortensen was already outside, leaning on the wing of the patrol care to smoke a cigarette.

Jan Reyna is a British police detective, but as a child he and his mother fled the remote Faroe Islands. Now he's back. His estranged father has been found unconscious with a shotgun by his side and someone else's blood at the scene. When a man's body washes ashore, Reyna has to wonder if his father is responsible.

Two years ago I read another crime novel set in the Faroes, and I've become intrigued with these remote islands that are found between Iceland and Norway. Author Chris Ould gives readers a good feel for the setting and the customs of the people and even provides a brief basic pronunciation guide to the language which comes in very handy (although the book is not overloaded with Faroese words).

Local policeman Hjalti Hentze was my favorite character, due in part to the fact that he explained local procedure and customs, but also because of his dedication and attitude. Jan Reyna, on the other hand, was abrasive and secretive-- understandable when readers take into consideration that he was spirited away from his home as a small child and-- to his knowledge-- none of his Faroese family tried to get in touch with him. We soon learn that one of the secrets he's hanging tight to involves his life in the UK, and we should be learning more about that in the next books in the proposed trilogy.

Reyna's negative attitude toward most of what he encountered in the islands made me a bit impatient with him, and  it was interesting to see how the author dealt with this as the story progressed.

There's an awful lot to like about this book, but I found it hampered by "too much middle" which slowed the pace down to a crawl. Yes, a small part of that slowness was due to the fact that most of the evidence had to be flown to Copenhagen for analysis (the Faroes are a part of Denmark), but it cannot be held accountable for it all.

Chris Ould has a marvelous setting and two main characters that deserve to be fleshed out even more. Although I did find The Blood Strand to have a flaw or two, I'm still looking forward to the next book in the series.