No Time for Goodbye by Linwood Barclay 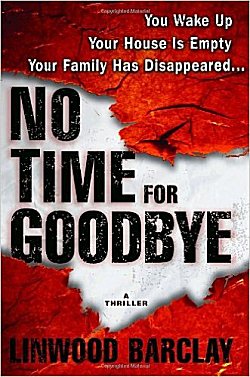 First Line: When Cynthia woke up, it was so quiet in the house she thought it must be Saturday.

Rebellious fourteen-year-old Cynthia Bigge fights with her father, storms up to her room, and goes to bed. When she wakes up in the morning, she discovers that she's the only one home. Her parents, her brother, they've all vanished, never to be seen again. Twenty-five years later, Cynthia is married and has a small daughter. She is still haunted by the disappearance of her family, and she turns to television to help her find some answers. What she's going to find out will shake her to her core.

I came late to the Linwood Barclay party, but I'm enjoying catching up. I enjoyed the "voice," the story, and the pacing of No Time for Goodbye, although I did have a problem or two with the book over all.

This plot is very carefully constructed. Seemingly unimportant objects mentioned casually are mentioned for a reason, and the same holds true for characters. Speaking of characters, my favorite was young Jane Scavullo, a troubled teen with so much potential. I don't know if she shows up in another Barclay novel, but I certainly wouldn't mind seeing her again.

Now for the two things that rubbed me the wrong way. Quite frankly, I found main character Cynthia Bigge to be a royal pain in the neck. Everything is about her. No one can voice an opinion if it might be "against" her, and she's in real danger of smothering her young daughter. Yes, it's realistic behavior for someone whose family vanished without explanation, but that doesn't mean I have to like her.

The other thing that bothered me was the explanation for what actually happened to Cynthia's parents and brother, so I can't say much about it without giving it away. I'll just say that Barclay's solution was a bit over-the-top for me, and I had trouble suspending my disbelief enough to accept it all.

But Linwood Barclay can write like a house afire. I love his plots, I love his voice, and just because I didn't like one of his characters doesn't mean I'm going to stop reading his books!