Eyes of the Innocent by Brad Parks 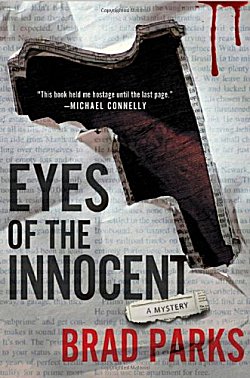 First Line: The electrician patted his breast pocket for the tenth time and, once again, exhaled noisily: the envelope-- Primo's envelope-- was still there.

The latest tragedy to befall Newark, New Jersey is a fast-moving house fire that claims the lives of two small boys. Investigative journalist Carter Ross (saddled with the paper's newest intern whom everyone calls "Sweet Thang") finds the victims' mother, Akilah Harris, who tells the two of a mortgage rate reset that forced her to leave her boys home alone while she worked two jobs. Ross's story becomes a front-page feature, but when a Newark councilman goes missing and holes start appearing in Harris's story, Ross and Sweet Thang find themselves deep in the unsavory world of urban house flipping and political corruption.

I found Brad Parks' third Carter Ross book, The Girl Next Door, such a wonderful blend of mystery, humor, heart, and character that I went back to the beginning of the series so I wouldn't miss a thing. It's taking me entirely too long to catch up, but I'm enjoying every page that Parks writes.

Interpersed throughout the book are a few short chapters told from the bad guy's point of view, and although they're not entirely necessary, they do show readers just what Ross is up against. We also get a real feel for working in a newsroom, with an editor who's perfected speech without the use of vowels (should I worry that I seem able to understand the man so easily?), and a boss who has a thing about space heaters. The one and only thing about this series that I can do without is the presence of another editor, Tina, whose biological clock has convinced her that Carter is the one-and-only sperm donor for her. Her behavior has gotten very old, very quickly, and I'm secretly hoping her clock implodes.

One of the things I love best about this series is Carter Ross's heart. As he looks at a photograph and into the eyes of two little dead boys, he knows he's going to do whatever it takes to find justice for them-- even if he is armed only with a pair of nail clippers. Carter Ross treats everyone he meets with respect, and that has to have a great deal to do with the stories he manages to root out.

It is so much fun to watch Carter, Sweet Thang, and fellow reporter Tommy piece all the clues to this mystery together. Sweet Thang (perhaps I should call her by her name, Lauren!) isn't the bubble-headed, bodacious bimbo that everyone thinks she is, and she actually shows quite a bit of potential as a reporter. In the midst of heart-warming moments, laugh-out-loud funny lines, and downright scary scenes, we also get to learn quite a bit about corruption in the real estate market. If I didn't already have a house bought and paid for, I'd almost  be tempted to live in a lean-to out in the woods rather than buy a house now....

There must be something in the water in New Jersey because that state has turned out some mighty fine writers with just the right combination of smarts, compassion, and humor that keep me coming back for all their books. You want a name or two?  Chris Grabenstein. Jeff Cohen. Harlan Coben. And never, ever forget Brad Parks. If you don't already, you're going to love Carter Ross as much as I do.