Where It Hurts by Reed Farrel Coleman 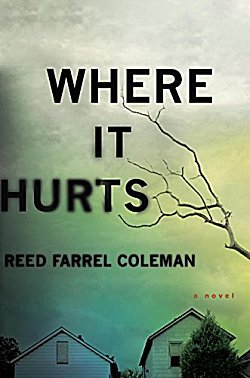 First Lines: Some people swallow their grief. Some let it swallow them.

Tragedy strikes, and the bottom drops out of Gus Murphy's world. His marriage implodes. His daughter is on the fast track to self-destruction. Instead of being a happily retired Suffolk County police officer, Gus is now divorced and drives a courtesy van for the past-its-best hotel where he has a room. The only thing that keeps his grief at bay is the mindless routine he has created for himself.

All that changes when ex-con Tommy Delcamino asks him for help. Four months ago the brutalized body of Tony's son was found in an abandoned lot, and the police don't seem to be doing a thing to find his killers. Tony is desperate, and he's turned to the only decent cop he's ever known and trusted: Gus Murphy.

Gus agrees, more or less just to get Tony out of his face, but then he becomes committed. He learns that Tony was telling the truth. Everyone who was involved with Tony's son has something to hide-- and they're deadly serious about keeping those things hidden.

This is my first experience reading a book written by Reed Farrel Coleman, and although my reactions are mixed, I doubt that it will be my last. Where It Hurts is a bit too "noir P.I." for me, but Coleman writes beautifully and put me right inside Gus's head. At the beginning Gus is a robot, and "robots know only what they need to know." As he takes on this investigation, we get to watch him coming out of his grief-stricken inertia.

However, the pace of this book was excruciatingly slow for two-thirds of its length, probably because we spend too much time in Gus's head, and he hasn't been properly re-introduced into society yet. Depressing and slow as it may be, after reading Where It Hurts, I can see why Coleman is admired by so many people.