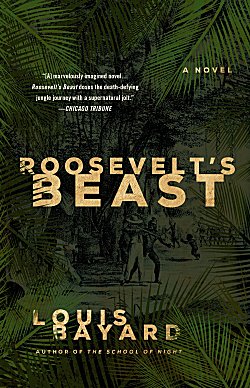 First Line: After all these years, his best friend is malaria.

In 1914 a large party which includes Theodore Roosevelt and his son Kermit set out to map Brazil's Rio de Dúvida (the River of Doubt) simply because it had never been done before and the former president needs an adventure. But the expedition is not going well. Trying to travel the river is the stuff of nightmares, and Theodore and his son are captured by a mysterious Amazonian tribe. The price of their freedom? They must find and kill a beast which leaves no track and which has never been seen.

Louis Bayard has as his foundation the riveting account of the Roosevelts' actual torturous journey down the River of Doubt, an adventure that Theodore never recovered from. Upon that foundation he builds a framework of psychological suspense. Kermit Roosevelt knows before he and his father ever start out to find and kill the beast that it will be something that will haunt him for the rest of his life-- a never-ending fever dream. Yes, Kermit is the Roosevelt who "owns" the beast in the title.

Bayard's foundation-- the expedition itself-- is riveting stuff, but once he began weaving his fiction into the facts, my interest began to lag. I have a very uneven track record with psychological suspense. I seem to either love it or hate it. I wouldn't go so far as to say that I hated the psychological side to Roosevelt's Beast, but I certainly didn't enjoy it. I disliked reading about what was going on in Kermit's head so much that I found myself wanting to skip ahead to try to find sections about the expedition. (I didn't.)

If your track record with psychological suspense is better than mine, I say go for it. If yours is as spotty as mine, I would highly recommend Candice Millard's The River of Doubt: Theodore Roosevelt's Darkest Journey. It's history that reads like the finest fiction, and it's one of the best books I've ever read.