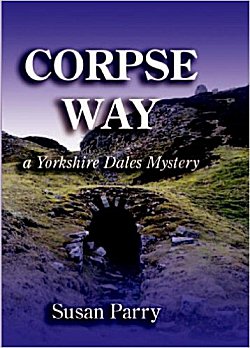 First Line: An old man in dark brown corduroys, with a tanned face and wispy white hair, was coming up the station steps.

Instead she's drawn into a mystery: what's going on at the isolated shooting lodge out on the moor, the identity of the Dutchman who rents it, and the deaths of two villagers-- one of them Millie's grandmother's friend. Lizzie Banford's granddaughter is convinced that her death was not due to natural causes, and Naomi enlists Millie's help in finding the truth.

I am familiar with the Swaledale area of the Yorkshire Dales, and author Susan Parry uses the setting wisely and well. From the weather, to the hiking, to area history and mining, the landscape came to life. It helps that young Millie is the sort of person who loves to go out walking for miles in all sorts of weather.

I don't know why, but I expected Millie's grandmother Helen to be a bit clingy and to demand most of Millie's time. (Too much personal experience, I suppose.) Helen was almost the polar opposite, and although she enjoyed spending time with her granddaughter, she also had a life and interests of her own and didn't monopolize Millie. I quite liked Helen.

I wish I could say the same of Millie and her newfound friend, Naomi. We're never given much of Millie's background. She's young and unhappy with her father's new wife, and she has yet to decide on any sort of career-- although she does make some headway on this while on holiday. She's naive and unwittingly causes a death. Millie is a (mostly) sensible girl, but she's not self-confident enough to put her foot down when someone is leading her astray. This leads me to the character that practically ruined the entire book for me.

Naomi. Naomi is young, pretty, studying medicine, and comes from a privileged background. It's the later that must have given her the belief that she and everyone else around her is seven feet tall and bullet-proof. Naomi is a loose cannon because-- as Millie later realizes-- "it's all a game to her." Her thoughtlessness causes a death, and she's extremely fortunate that the death toll didn't rise much higher.

Although the setting is everything I could have wished for and more, with two young, thoughtless characters and a mystery whose solution was too easily pieced together, unfortunately I doubt that I'll be visiting the Dales with Millie again.