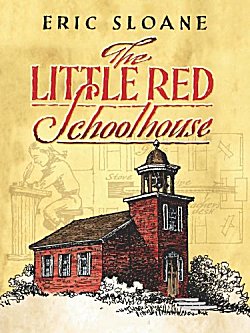 I've been fascinated with the artwork of Eric Sloane since I was a child, and I picked up this paperback on a whim. Several decades later, would I still be intrigued with Sloane's work?

I'm more interested in it now than I was all those years ago. When I was a child, it was his art that fired my enthusiasm: early American buildings and tools. But when I paged through The Little Red Schoolhouse, I still drank in the art, but I also read every scrap of text.

Sloane was a passionate advocate of early American life and values, and you can see it in this book. Along with his evocative illustrations, he tells us how schoolhouse properties were set up, how they experimented with octagonal and circular buildings-- even how teachers were paid. Along the way he also shows us how times have changed: "Education, like modern everyday life, has suddenly become regarded as a means of making more money." Yes, education has much to do with earning a higher salary, but it can be so much more, and Sloane reminds us just what that "more" is.

If you're interested in early American history, life, and architecture, I highly recommend any of the books written and illustrated by Eric Sloane. He is a master.