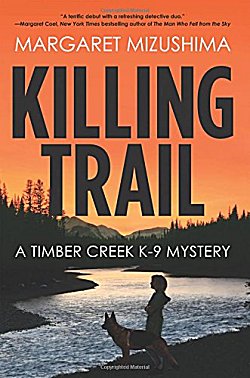 A young girl has been found dead in the mountains outside Timber Creek, Colorado, and Officer Mattie Cobb and her K-9 police dog Robo are assigned to the case.

With the help of local veterinarian Cole Walker, Mattie and Robo are trying to track down the truth before it claims another victim, but the more Mattie digs, the more secrets she uncovers about her small town.

Killing Trail is the first book in an extremely promising new series. Mattie Cobb is a fascinating character whose childhood in the foster care system gives her a rapport with children that sometimes leads her to err in the young ones' favor. Mattie is smart and brave, a loner who believes in the value of hard work. Her growing bond with Robo-- which is one of the strongest elements in this book-- has the added bonus of improving her social skills with her fellow humans.

Veterinarian Cole Walker is finding it difficult to heal from his wife's desertion, which leaves him as the sole parent to their two young daughters. He may be a potential love interest for Mattie, but he does have problems he must deal with. Mizushima has created two-- make that three with Robo-- very strong characters for her series.

Mizushima has also written some first-rate action sequences in Killing Trail, and the explanations of the training and procedures required for working with police dogs is fascinating. I found myself comparing it favorably to Robert Crais's Suspect as a matter of fact.

As much as I enjoyed this book, it's not without a rookie problem or two. The writing is a touch amateurish. As the K-9 training and work procedures are explained, these feel more like lessons instead of flowing smoothly as part of the narrative. Also, many of the clues are too obviously planted. But you know what? Things like this are easy for me to overlook because Mizushima nails her characters and the action in her engrossing story.  These slightly rough edges can be knocked off by the second book, and speaking of that second book-- bring it on! I want more Maggie and Robo!