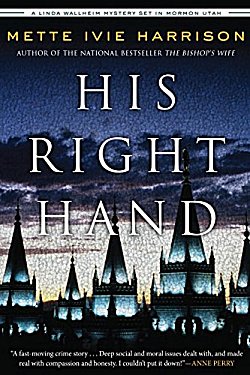 First Line: One Friday night in May, in lieu of our regular couple's date, my husband, Kurt, and I were going to the annual bishopric dinner.

It's difficult enough keeping an elaborately staged death on church property quiet, but what happens when people in Draper, Utah, learn that the dead man was not only Bishop Wallheim's right-hand man, he wasn't even a man but a biological female?

The bishop's wife, Linda Wallheim, is concerned about the ward, but she's even more concerned about Carl Ashby's grieving family. To complicate matters, her husband seems more affected by Carl's gender than his death. In the Mormon faith, gender is considered part of a person's soul, and as the days pass, Linda sees Church officials more concerned with hushing up the story of Carl's transgenderism than they are with solving his murder. She soon realizes that police are going to need an ally on the inside if they are going to have any sort of chance to find Carl's killer, and she's the only one who can help. She's got to work fast. Rumors are already beginning to spread, and they're threatening to tear her community apart.

With the Mormon Church's recent hardline decision on the LGBT community within its ranks, His Right Hand couldn't possibly be more timely. In this second book to feature Linda Wallheim, there are many secrets to be uncovered, and some of these secrets belong to Linda and her own family. The more about Carl Ashby that's uncovered, the clearer the killer's identity becomes, but proving it is tough because Church officials have closed ranks against the police. This is a maneuver that has been perfected over almost two centuries because of the intense persecution Mormons faced in the nineteenth century.

Linda seems more sure of herself in this second book in the series. She still questions her place in life now that her last child is off to university and out of the house, but she's calmer, and it's got a lot to do with the friendship she's formed with a neighbor. It was fascinating for me to watch Linda investigate this extremely volatile case, especially with regard to her uneasy relationship with the homicide detective in charge.

One of the strengths of this book (and the series) is the portrait of Mormonism that Mette Ivie Harrison paints for us. It is a heartfelt portrait by an artist who has done much soul-searching. It is a balanced portrait that is as honest as the artist can make it, showing both the good and the bad in this religion that most people know nothing about.

Many readers like me enjoy reading mysteries set in other countries in order to learn about different cultures. Often we forget to pay attention to the different cultures that are on our own doorstep. I find Harrison's Linda Wallheim books to be good mysteries with strong characters. That they are also meditative and enlightening is icing on the cake.