The Unexpected Inheritance of Inspector Chopra by Vaseem Khan 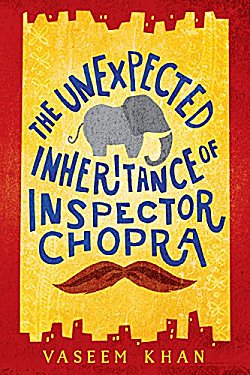 First Line: On the day that he was due to retire, Inspector Ashwin Chopra discovered that he had inherited an elephant.

On the day he is to retire, Inspector Ashwin Chopra of the Mumbai police inherits a baby elephant, but he has little time to think of it as anything other than a joke. His last day on the job is strangely unfulfilling, partly because a boy has drowned under suspicious circumstances, and no one seems to care. Yes, the boy lived in an extremely poor part of the city, but that means nothing to Chopra. Everyone is entitled to justice in his book.

At the end of his last day, Chopra's now ex-boss tells him that under no uncertain terms is he to investigate the boy's death. But Chopra simply cannot leave it alone-- even when he returns home to find a crowd of neighbors and a baby elephant waiting for him. His own private investigation takes him from one corner of Mumbai to the next, from posh high-rises to slums to Mumbai's thriving underworld. It's a case fraught with peril, and Chopra soon begins to understand that a determined elephant can be just the sort of partner he needs.

I doubt that I am the only reader out there who's been missing Tarquin Hall's excellent Vish Puri mystery series set in New Delhi, India. When I came across this book, I simply had to read it. What did I learn from it? That Vaseem Khan's new series has every hallmark of being a good alternative to the missing New Delhi private investigator (but without the mouthwatering food).

Ashwin Chopra is a dedicated police officer and a thoroughly honest man. He and the men in his department knew what to expect from each other, and they enjoyed working with each other. Chopra and his men certainly have a period of adjustment to undergo. His wife Poppy and his totally obnoxious mother-in-law also have this same period of adjustment, especially Poppy because Chopra just isn't capable of turning into a man of leisure, which is what Poppy wanted.

Khan shows us many faces of modern Mumbai: how it's changing, its politics, and its corruption. I look forward to getting to know this city even better in future books.

This is a first book, and it shows from time to time. The writing doesn't always flow smoothly, and Khan does something that always annoys me by sharing a couple of the clues after the investigative dust has settled. But all in all, this is a good read. You'll be surprised by how well a baby elephant can fit into a murder investigation-- and not just by adding humor. The Unexpected Inheritance of Inspector Chopra has set up this new series nicely, and I look forward to seeing him and his elephant in action again soon.