The Life We Bury by Allen Eskens 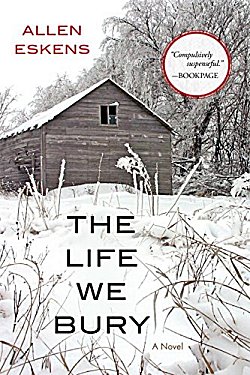 First Line: I remember being pestered by a sense of dread as I walked to my car that day, pressed down by a wave of foreboding that swirled around my head and broke against the evening in small ripples.

Joe Talbert has a writing assignment to complete for a college English class: to interview a stranger and write about a turning point in that person's life. With deadlines looming and a feeling of desperation, Joe goes to a local nursing home to find a willing subject.

Carl Iverson is a Vietnam veteran. He was also convicted of the brutal rape and murder of a teenage girl. After serving thirty years o fhis sentence, he's been medically paroled to the nursing home because he only has a few months left to live.

Although the two get off to a rocky start, the more Joe learns about Carl's life, the more he thinks Carl was innocent of that long-ago murder. With the help of his very skeptical neighbor Lila, he begins his own investigation to uncover the truth. But it's not easy. All his effort is bringing a very painful memory to the surface, and not only that, he is constantly being thwarted by the demands of his alcoholic mother and the vulnerability of his autistic younger brother.

Joe Talbert is an extraordinary young man who desperately wants a life of his own. Unfortunately-- due to his irresponsible, alcoholic mother-- Joe has always been the parent of the family. From a young age, he's the one who's had to make sure the bills are paid, there's food on the table, the clothes are clean, and his brother Jeremy is taken care of properly. Joe is at the age where he feels as though he's drowning under the weight of all his responsibilities, and if anyone feels that the life of this character is unrealistic, they should feel fortunate for having led a sheltered existence.

Joe is the bright and shining light in this book, and all the other characters and all the other elements strengthen this. He may have a cast iron sense of responsibility, and that sense of decency of his may be incredible, but he's still a kid. A kid who wishes his mother would somehow magically grow up. A kid who wishes his little brother didn't need him so much. A kid who'd like to have a girlfriend and be normal instead of having so much homework and working more than one job to pay his bills and tuition. And... as most kids do... he has this belief in his own immortality which (to him) means that when he finds the dragon and goes out to slay it, the dragon will simply roll over and die without a fight.

Joe's voice carried me effortlessly through each and every page of this book.  His story may have been told many times and in many ways over the centuries, but that doesn't make Allen Eskens' first book any less powerful. I look forward to his next with a great deal of anticipation.