No Honor Among Thieves by J.A. Jance 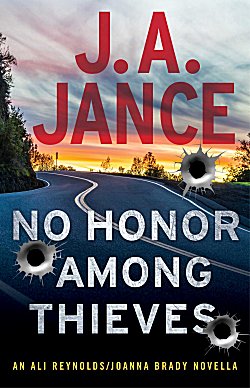 First Line: When Sheriff Joanna Brady's distinctive rooster ring tone jarred her awake at oh-dark-thirty in the morning, she grabbed the phone off the bedside table and shot a guilty glance at her sleeping husband before she answered.

Cochise County Sheriff Joanna Brady gets one of those dreaded middle-of-the-night phone calls. A semi has gone over the embankment at the San Pedro River. It's not just a simple case of the driver going to sleep and crossing the center line. No, he was shot multiple times by someone with some serious high-powered weaponry. So Joanna has a wrecked semi, a dead driver, and what looks like hundreds of boxes of Legos scattered all over the road.

They're not ordinary Legos; they're collector's sets worth a lot of money to those willing to pay, and they're being tracked by B. Simpson's security firm. B.'s wife, Ali Reynolds, is just the person to get to the bottom of this, so she heads down to give Joanna a hand.

This is the first pairing of two of J.A. Jance's characters, Joanna Brady and Ali Reynolds-- two very strong women who know how to get the job done. No Honor Among Thieves has the wonderful setting that I've come to expect from any of Jance's work set in Arizona, and it has a lightning fast pace that never lets up.

This is a successful pairing that I wouldn't mind seeing more of. I've been a diehard Brady fan since the first book in the series, Desert Heat. I've never quite warmed up to Ali, but she is an interesting character, and I wanted to see how the two of them worked together.

While we're racing through the narrative, we're learning about the fight against black market goods, and Joanna knows that she's got some news for her family and co-workers when this case is wrapped up. Ali proves indispensable from a tech standpoint because she and her husband's business can supply all sorts of things that would blow Brady's budget to smithereens.

I was in awe of Joanna Brady's quick decision-making and her ability to take command of a dangerous multi-front situation. She's come a long way from that first book when she had absolutely no firsthand experience of law enforcement. I was proud of her. On the other hand, I felt Ali Reynolds was a little silly there toward the end. She let her nose get out of joint because Brady was too distracted trying to get everything wrapped up to give Ali the profuse thanks that she felt she deserved. What happens when you let your nose get out of joint? You usually do something stupid.

As I said before, this is a pairing I'd like to see more of. It's fun to watch two strong, intelligent women work shoulder to shoulder to solve a crime. If you're a fan like me, you'll find that this novella advances Joanna's story a bit, but not Ali's. If you've not had the pleasure of reading either of Jance's series, I think No Honor Among Thieves would be an excellent place to start. Chances are, when you're finished, you're going to want more books featuring Joanna and Ali.