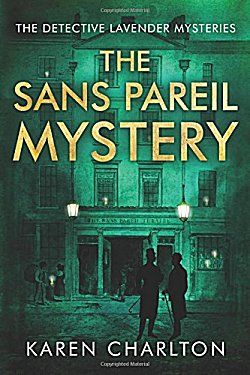 The death of the young actress April Clare has Detective Stephen Lavender and his partner Constable Woods discovering that nothing is as it seems in London's Sans Pareil Theatre.

It's 1810, and the Napoleonic War blazes on the other side of the Channel. Spies are a real concern. As Lavender and Woods follow clues from Covent Garden through to the upper ranks of society, they begin to wonder if this case is much bigger than they'd imagined.

This follow-up to the first Detective Lavender mystery, The Heiress of Linn Hagh, is set in an actual theatre of the time that was run by a woman. And speaking of women, Lavender's love interest, the beautiful Spanish Magdalena, plays a much more important role in this book-- both as lover and in having her share of the action. In that day attitudes towards Catholics generally were not at all sympathetic, especially the opinions of people in authority. If Lavender marries Magdalena, it could be a career-ending (or at least -limiting) move. It will be interesting to see how Charlton deals with this in future books.

The pacing of The Sans Pareil Mystery tends to be slow until just before the end when all the pieces of the puzzle start coming together. It's a solid entry in this fledgling series and holds a great deal of promise for the future.