The Forgotten Highlander by Alistair Urquhart 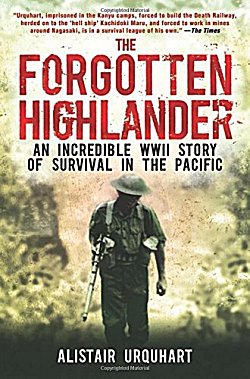 First Line: As one of the last survivors of my battalion of the Gordon Highlanders, the majority of whom were either killed or captured by the Japanese Imperial Army in Singapore, I know that I am a lucky man.

The life of World War II veteran Alistair Urquhart almost beggars belief. As a hard-working young man with a bright future ahead of him in Aberdeen, Scotland, Alistair is drafted into the Gordon Highlanders and shipped with his fellow soldiers to Singapore.

Urquhart, along with so many of his fellows, is captured when the Japanese overrun Singapore, and they all are packed into boxcars and shipped to work on the Death Railway between Thailand and Burma. Tens of thousands of natives and POWs died in its construction, but Urquhart managed to survive. He was then crammed aboard a Japanese hell ship that was torpedoed by an American submarine. After five days, Urquhart was picked up by Japanese fishermen and taken to another work camp at Omuta. Two months later he was ten miles away from Ground Zero when the atomic bomb was dropped on Nagasaki. In August of 1945 he was freed by the U.S. Navy.

When I first read the synopsis of this book, two thoughts ran through my mind. (1) Alistair Urquhart went through even more than Louis Zamperini, an American POW made famous by Laura Hillenbrand's Unbroken. (2) A line from an old television variety show-- "If it weren't for bad luck, I'd have no luck at all." What an incredible will that man must have!

Although the quality of writing isn't nearly as high as Hillenbrand's in Unbroken, I enjoyed this book more. It has everything to do with Urquhart's voice. In The Forgotten Highlander, you get it direct, unfiltered by someone else. His rage, though well-tempered from the passage of years, comes through loud and clear, and it's not just directed at the Japanese. This man is a Scot, and Scots are known for treating everyone as though they're standing on a level playing field. He had no use for the prejudice and colonialism he found in Singapore, and he found things so badly run that he was surprised that the Japanese hadn't taken over long ago. He also points the finger at himself. He was far from being all sweetness and light during his years as a POW, and when his behavior was detrimental to himself and others, he lets us know about it. His honesty brings this story to an even higher level.

This man was forced to endure a hell that you and I can't even begin to imagine. What Urquhart finds completely unacceptable is that young Japanese know very little about how their own country conducted itself in World War II. Those growing up in Germany know their true history, and Urquhart believes Japanese children should, too. (I'll rework Santayana a bit to say "Those who do not learn history are doomed to repeat it.")

The Forgotten Highlander is ugly. It's brutal. Above all, it's honest. It even has flashes of humor-- and it's stories like these that are vital in our understanding of World War II. Alistair Urquhart is an incredible man, and I am fortunate to have read his story.


The Forgotten Highlander: An Incredible WWII Story of Survival in the Pacific
by Alistair Urquhart
eISBN: 9781616081522
Skyhorse Publishing © 2010
eBook, 312 pages