Hover by Anne A. Wilson 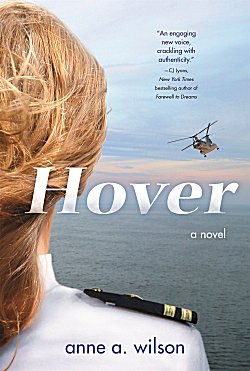 Helicopter pilot Lieutenant Sara Denning can be a mass of contradictions. She wants to be the absolute best that she can be as a U.S. Navy pilot, but she doesn't want to stand out in any way. She's a Naval Academy graduate who's deathly afraid of the water. She's a lonely hermit who's a total contrast to her very feminine and outgoing best friend and roommate, Emily Wyatt. Sara is buried under so many defensive layers that she's lost herself.

But that's all about to change. She's the pilot of choice for a Navy SEAL team led by Lieutenant Eric Marxen. This blatant favoritism causes Sara all sorts of problems with her fellow pilots, and although she wants those problems to disappear, she can't deny that Marxen is making all her defenses begin to crumble. Soon the training missions become the real thing, and Sara's life is on the line. Is she going to have what it takes to not only survive but to become the person she was meant to be?

As I've already stated, Sara Denning is a mass of contradictions. The words she uses to describe the sea can make a person's skin crawl-- and I love the ocean. It definitely made me wonder why on earth she would deliberately choose to join the Navy. Readers aren't left to wonder for long: Sara is carrying a boatload of guilt over her brother's death. She's thrown up so many defensive walls to help her cope-- and even excel-- at something she's petrified of that it's a wonder she's still sane. Hover is a character study of Sara Denning, and it's a fascinating one even though it has more romance in it than I would prefer.  I do have to say that yes, I did find the romance annoying from time to time, but it is essential to the growth of Sara's character, so I just sat back and dealt with it.

Dealing with it wasn't all that difficult because there were so many other facets of the book that I enjoyed-- what some readers might call the Tom Clancy elements of military technology and training, those training missions, being part of a carrier strike force, and Sara's being groomed for a top secret mission. These elements shouldn't be too over-the-top for most female readers because of the focus on-- yes-- that romance, and on Sara's relationships with her best friend, her fellow pilots, and her superior officers. Throw in some shore leave in Hong Kong and the United Arab Emirates, and Hover is a book that kept my attention from first page to last. If this is a first novel (and it is), I'm really looking forward to Anne Wilson's next book!