Devil of Delphi by Jeffrey Siger 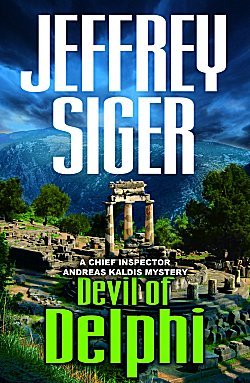 First Line: He was born precisely one year after his mother's death.

Delphi, Greece, once stood at the center of the world, and now the assassin Kharon has chosen to live amid its rolling hills filled with olive groves. Although Kharon is trying to rebuild his life, his past refuses to stay behind him. The mastermind behind the counterfeit of some of the most celebrated alcoholic beverages in the world wants him to work for her. Kharon has no choice, but he does manage to dictate his own methods and his own payoff.

Chief Inspector Andreas Kaldis is drawn into a political firestorm when Kharon shoots a member of one of Greece's richest-- and most feared-- families. Once again Kaldis has a mess to clean up, but he has a team that just might be able to get the job done without any casualties.

Author Jeffrey Siger lives part of the year on the Greek island of Mykonos, and he certainly has his fingers on the pulse of what's going on in that beleaguered country. His vivid settings showcase a different part of Greece in each book, and readers learn the customs of the country along the way. (In Devil of Delphi, we learn the unique way the Greek government has of dealing with citizens' real estate taxes and electric bills.)

As exciting and as timely as Siger's plots are, it's his sense of humor and his characters that really make me come back, book after book. Now a husband and father, Kaldis's family life plays a large part in the series, and his wife usually manages to steal the scene at least once per book. Add a secretary who's so good you'd swear she was psychic along with a crack team of investigators, and you have the stage set for a rip-roaring tale. Even Kaldis's boss shows unexpected depth in Devil of Delphi, and Kharon is the perfect type of bad guy: skilled, scary, and intriguingly principled. He's a refreshing change from loutish villains whose one-size-fits-all solution to everything is unreasoning violence.

I think that one of the reasons why I enjoyed this book (and the series) so much is that Kaldis and his men are smart enough to know when to sit back, observe carefully, and let the bad guys take care of business. Like Kharon, these men know how to think, and this makes for excellent reading.

There's an unexpected development for Kaldis at the end of Devil of Delphi that has me anxiously awaiting the next book. This seventh book in the series can be read as a standalone, but don't blame me if you find yourself finishing it and looking for all the others. They're that good.