Vengeance Is Mine by Reavis Z. Wortham 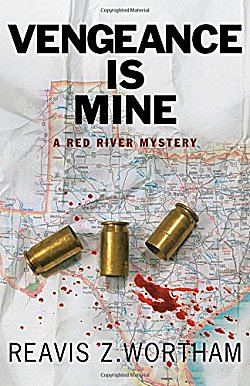 First Line: Tony Agrioli was grateful to leave the blistering sun and dive into the cold air of Malachi Best's noisy The Desert Gold casino.

Mob enforcer Tony Agrioli is used to killing those who get in his boss's way, but he does have a line or two that he's not willing to cross. When faced with one of those lines, he takes his girlfriend and hightails it out of Las Vegas, heading for someplace he thinks the Mob will never look for him: the tiny backwater of Center Springs, Texas.

What Tony doesn't take into consideration is the fact that he and his girlfriend aren't exactly the types to blend in this sleepy little town. In no time at all they're getting to know young Top and his cousin Pepper, and all the other local denizens.

Top and Pepper are still dealing with what happened to them at the Rock Hole. Top has an opportunity to take vengeance into his own hands here, and Pepper is convinced that Center Springs is an evil place. She's fallen for the just-passed Summer of Love and wants to go to California where the young people there know that the most important things in the world are peace and love. What she doesn't realize is that what's happening in her hometown is due to a very bad person who lives there. This person is going to have to be dealt with if Center Springs has a chance of being safe and happy again.

Wortham has completely won me over with his blend of humor and seriousness. With one word, he can have me reliving my youth in my own central Illinois version of Center Springs. Last time in The Right Side of Wrong, that one word was "bobwire" (barbed wire). In Vengeance Is Mine, it's "worsh" (wash).  Even if you didn't grow up in a small town in the 1960s, you're certainly going to know what it was like by reading Wortham.

There's a seriousness to Wortham: big city problems moving into small towns, the effects a new dam is going to have on the area, the fact that white adults always have to think of the consequences if they or their children are seen mixing with black people. Drugs, technology, violence, racism. Pretty important-- and serious-- stuff, but Wortham is an expert at leavening the grim with laugh-out-loud humor. In this book the author taught me about some of the lyrics to a Little Richard song, city slicker Tony walking into a country store and quizzically eyeing a tin of Bag Balm, and Top being told a few facts of life by Pepper and two other young girls.

There's usually a scene towards the end when all Hades breaks loose, and Vengeance Is Mine is no exception. What makes it one of my favorites in this series is its "Witness"- like quality. (Remember the movie where Harrison Ford lives among the Amish for a while?) Yes, bad things happen in small towns, but folks there still know that they're all in this together. And it's the working together that makes things better.

These Red River mysteries have turned into one of my favorite series-- for the spot-on setting, for one of the best casts of characters going, for the humor, and for some high-octane action scenes that make my socks roll up and down. Each book does well as a standalone, but don't deny yourself one second of enjoyment. Begin at the beginning with The Rock Hole. You'll be glad you did!