Those We Left Behind by Stuart Neville 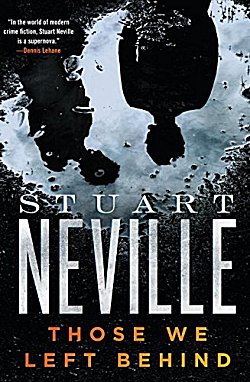 First Line: The pillow is cool on Ciaran's cheek, damp from sweat.

Seven years ago Ciaran Devine made headlines in Belfast, Northern Ireland, as the young boy who brutally murdered his foster father. On the eve of his release, Paula Cunninghan, the woman who's been assigned as his probation officer, contacts Detective Chief Inspector Selena Flanagan. Flanagan, recently returned to the force after her battle with breast cancer, may be able to provide Cunningham with insight into Ciaran's character. Seven years ago Flanagan was the only person who could persuade young Ciaran to speak.

Cunningham is right to be concerned. Ciaran's release begins a chain of events-- from the meeting with the brother who has a great deal of influence over him, to the man bent on revenge for his father's death. Faced with pitying looks from her coworkers and a mountain of paperwork on her desk, DCI Flanagan instead concentrates on Ciaran and those doubts she's had about his guilt for over seven years.

In reading Those We Left Behind, I was moved to pity for Ciaran Devine, the boy everyone felt free to take advantage of his entire life, but that was the most involvement I felt. To me the story was all too predictable from beginning to end and filled with people for whom I really didn't care. It's well-written and the pacing flows smoothly, but unfortunately the entire story felt lifeless. I know that Stuart Neville is well regarded, and since this is the first book of his I've read, I'll read another of his books in the future. This one just isn't my cup of tea.