The Collaborator of Bethlehem by Matt Beynon Rees 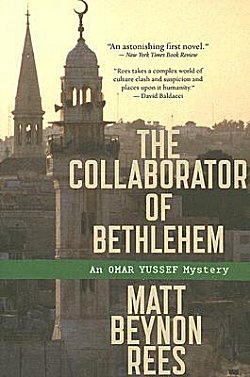 First Line: Omar Yussef, a teacher of history to the unhappy children of Dehaisha refugee camp, shuffled stiffly up the meandering road, past the gray, stone homes built in the time of the Turks on the edge of Beit Jala.

Omar Yussef has been a history teacher to Bethlehem's children for decades. When George Saba, a member of the Christian minority and one of Yussef's favorite pupils, is arrested for collaborating with the Israelis in the death of a Palestinian guerilla, Yussef is convinced that he's been framed. Yussef must find the evidence to clear Saba. If he doesn't, this good, honest man will be executed, leaving a wife and children in the midst of hostile neighbors.

But there is a cost for Yussef's persistence. When another of his favorite pupils is murdered and Yussef's investigation narrows down to one man, he and his family are threatened. Only one man-- one history professor-- is willing to stand up and fight for what is right. But will Omar Yussef and his family survive?

Rees has created a story with a superb sense of time and place, and he does so by showing the humanity of all sides. The monsters aren't all Palestinian. Or Israeli. The mistakes being made aren't all being made by Palestinians or Israelis. And there are good people on every side. This is a story to experience. A story for the mind and for the emotions.

One of the good people is Omar Yussef, who feels that he may be coming to the end of his usefulness. He can't seem to stop being angry at the children in his class who do nothing but spout political clichés, but when he tries to destroy their hate and their blindness, all he seems to do is make himself angrier and the children distrustful of  him.

The plight of George Saba is a godsend for this man. Yussef has a deep-seated need to fight injustice. For years he's been buffeted by the winds of political and religious unrest, but he is still willing to stand up for what he believes in. The power of Rees's writing is that while the reader is cheering Yussef for his bravery, he is also afraid because of what may happen to this one solitary man.

Yussef isn't Mr. Perfect. He may endear himself to us by telling us of the power of his wife's cooking or of what he believes to be the most important thing about teaching. He may enlighten us about the proliferation of murals depicting the Alps inside Bethlehem's homes, but the years have soured him a bit. He's not always right about the people he comes in contact with every day. Readers have to keep an eye on Yussef as they follow his investigation.

Omar Yussef is told early on in The Collaborator of Bethlehem that "In Palestine, there's no such thing as a good detective." Yussef still has much to learn, but I think it's safe to say that Palestine now has that badly needed investigator.