The Cadaver Game by Kate Ellis 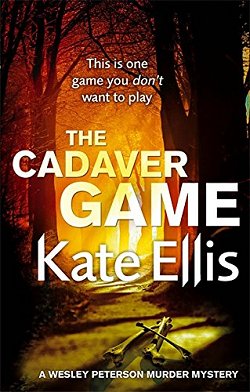 First Line: Run as fast as you can, because captivity means certain death.

An anonymous tip leads Detective Inspector Wesley Peterson to the decomposing body of a murdered woman in a suburban house. Peterson is having an extremely difficult time in establishing her identity, and as he and his team keep digging for facts, he has another case land on his desk: the bodies of two teenagers have been found shot to death at the base of a cliff.

Both cases continue to grow stranger by the minute when Peterson uncovers links to historic local events that took place during the Napoleonic Era and an online game called Blood Hunt that's popular with teens. Peterson realizes that he's got two cases that he and his team are just going to have to keep chipping away at until all the pieces finally come together. But will that happen before anyone else dies?

If there is one thought I carried away from The Cadaver Game it's if the future lies in our children, we sometimes have reason to be very afraid. To say more would be to give away more of the plot than I care to do.

This is my sixteenth outing with Wesley, his team, and his boss Gerry Heffernan. I've watched each character grow and enjoyed the way Kate Ellis blends a modern police procedural series (Wesley) with archaeology and history (his friend Neil Watson). It's always good to catch up with Ellis's characters, although I did notice that their private lives had a smaller presence in this book than in previous ones. I think I know why.

The present-day police and archaeological work is interspersed with chapters from the diaries of two men who worked on the Catton Hall estate. Some readers may think that the historical details in this book are a bit fantastical, so I would urge them to read Ellis's notes at the back of the book.

If there's a bit less about the characters' personal lives in The Cadaver Game, I think it has a lot to do with the excellent and intricate plot that the author has created. It's the very best sort of jigsaw puzzle in which most of the fun is in trying to put all the pieces together without bending the corners of any of them. I have to admit that I usually prefer characterization above all (not that I want a badly constructed story!), but once in a while I come across such a finely crafted plot that I just have to let the characters take a little holiday. Knowing Ellis the way I do, all her marvelous people will be back stronger than ever in the next book (The Shadow Collector), and I have it waiting for me. This consistently high quality series has been one of my favorites ever since I read the first book.