Threads of Evidence by Lea Wait 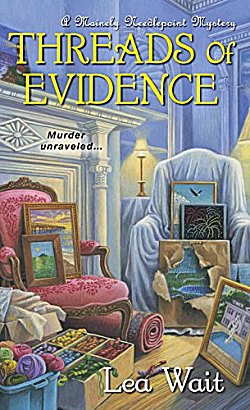 First Line: One black Town Car, one blue Subaru, and a dented red pickup were parked in the driveway of the old Gardener estate.

Aurora, the crumbling Victorian mansion that's part of the old Gardener estate, has stood empty for the past quarter of a century. Some in Haven Harbor, Maine, say it's haunted by the ghost of young Jasmine Gardener who died there in 1970. But Aurora will no longer be cursed by neglect for famous Hollywood actress Skye West has bought it. Intending to renovate the old house, she asks Angie Curtis to appraise the house's contents so they can be cleared out and sold. She wants the remodel to begin as quickly as possible.

When Angie begins the process of restoring a series of needlepoint pictures created by the dead girl's mother, she finds clues that seem to point to the fact that Jasmine's death was murder, not an accident. When she tries to stitch everything together, it becomes crystal clear that the murderer wants the truth about Jasmine's death to remain buried.

With just two books in the Mainely Needlepoint series so far, I confess that I'm hooked. Lea Wait has a series that delivers when it comes to needlepoint (this time restoring old damaged pieces) without going overboard. That can be a tricky path to tread, but if there's needlepoint in the cozy I'm reading, I want its percentage to be somewhere between just walking past a shop window and saying, "Oh look at that needlepoint pillow!" and doing so much stitching that the characters don't have time to stick their noses outside to solve a murder. The author has the perfect blend in this series, and that really ups the enjoyment factor for me.

Threads of Evidence also started like gangbusters with Angie and her friend clearing out that marvelous old house and getting ready for a sale. As long as that was going on, I refused any and all attempts to get me to come up for air. What's wonderful is that once the sale was over, the story and the characters assumed control and kept me turning the pages enthusiastically.

Angie is one of the best amateur sleuths going because she worked for a private investigator in Arizona. She's familiar with how to do things, and if she needs some help, she can always phone up her former boss. She's also very level-headed and smart. Life dealt her some hard knocks rather early in life, so even though she's positive and upbeat, she's still a bit reserved. (Have some fun, but don't be surprised if someone wants to shove you into the handbasket to Hell.)

There's some competition between Angie and her friend, and other Mainely Needlepointers do their part to help solve the crime. If that's not enough, there's Angie's grandmother's wedding to keep tabs on. I only solved half the mystery which is always a plus-- and I have a confession to make. I wish that Hollywood actress had chosen a screen name that didn't make my eyes hiccup every time they saw it. It probably won't bother you a bit, but since I'm from Phoenix, Skye West just sounds like a blend of Sky Harbor Airport and the old America West Arena-- or the name of an airline. I know. Silly, aren't I?

What's not silly is how much I enjoyed this book, and how highly I rate this series. Bring on book three! I can't wait to see what happens next to Angie and the Mainely Needlepointers.