The Patriarch by Martin Walker 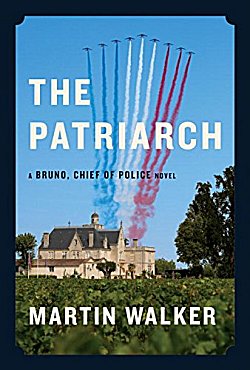 First Line: Benoît Courrèges, chief of police of the small French town of St. Denis and know to everyone as Bruno, had been looking forward to this day so much that he'd never considered the possibility that it might end in tragedy.

Bruno, Chief of Police in the small village of St. Denis in southern France, is thrilled. He's attending the birthday party of his lifelong hero, Marco "the Patriarch" Desaix. Desaix is such a national icon that everyone knows his exploits as a World War II flying ace.

When Gilbert, a longtime friend of Desaix, dies at the party, it's thought to be an accident, but Bruno isn't so sure. His investigation into the death is in danger of being sidetracked by escalating conflict between hunters and an animal rights activist as well as his own complicated romantic situation. But there's one thing that Bruno needs to remember: he's dealing with an extremely famous and beloved man. He needs to tread very carefully.

I've been passionate about Martin Walker's Bruno Chief of Police series since its inception. Each new book has been eagerly awaited and lovingly read. Walker is a master of portraying the history, culture, and food of the Dordogne in France. When I finish reading each book, it's a miracle that I don't speak with a French accent. I. Love. This. Series.

If you felt that the above paragraph was leading toward a "but," you would be correct. I've been noticing a trend in the last two or three books. A waning of authorial interest perhaps? For me The Patriarch felt rather lackluster.

Walker usually enlightens readers about a little known segment of French World War II history that I normally find fascinating, but this time the plot thread involving a French flying ace in Russia and another character's Cold War spy shenanigans seemed hurriedly resolved and just didn't drum up much interest in me. The subplot with the animal rights activist and the hunters wasn't really resolved at all, although Walker did illuminate the entire situation and its repercussions well.

Bruno has to face disillusionment on more than one front in this book. Once again he's at a romantic crossroads, but this time he didn't seem very interested in his own love life. Even the scenes filled with wine and food seemed perfunctory.

Don't get me wrong. I haven't gone off this series by any means. What I perceive to be Walker's "lackluster" novel is still much better than many other writers' "very good" ones. If anything, it's a reminder of how difficult it must be for writers to maintain not only interest but quality in a long-running series. But when I pick up the next Bruno book, there will be a hesitation and a bit of skepticism that wasn't there before.