The Dream Stalker by Margaret Coel 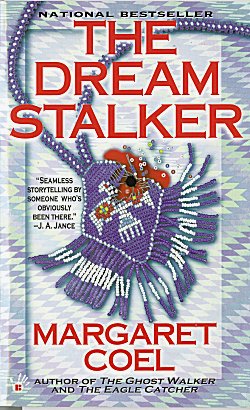 First Line: Rain pattered against the window and broke through the quiet in the study.

Once again the vivid setting of the Wind River Reservation in Wyoming provides a dramatic backdrop for Father John O'Malley and Arapaho lawyer Vicky Holden to solve a crime of greed and false promises.

A big power company from back East has come to the Wind River Reservation promising lots of jobs and lots of money if the Arapaho will agree to store nuclear waste on their land. This company has had geological surveys done to prove that the site they have chosen is completely safe. To an impoverished people, most of whom live from day to day, the promise of safety and the lure of jobs is irresistible. But to Father John O'Malley of the St. Francis Jesuit Mission and to Vicky Holden, the dangers far outweigh the benefits. Trouble is, someone is quite willing to silence anyone who opposes the storage dump.

Margaret Coel has a plot that immediately raises my hackles. If nuclear waste needs to be taken care of, it needs to be taken care of where it was created, not shipped off "out in the middle of nowhere" for other people to deal with. Same thing goes for junked electronics, or any other waste created by society anywhere around the world. This program of avoidance is rife with dangers, and Coel deals with them in fine fashion.

Once again it's Father John and Vicky who bring the story to life. Although the two are attracted to each other, The Dream Stalker doesn't revolve around that one fact. Father John is dealing with yet another new priest sent to help him, and he's learning that what is to him a place of redemption and peace isn't thought of in the same light by the Church hierarchy. The constant struggle to keep the mission monetarily afloat adds an immediacy to the book as well.

What adds "zing" is the very real sense of danger to Vicky Holden, who refuses to be silent about the nuclear waste storage facility. The debate has brought the media and environmentalists into an already fraught situation, and Coel kept me worrying about Vicky. There is no safe place for the Arapaho lawyer-- even among her own people.

I came to this series late, but I'm enjoying every minute of Coel's plots, setting, and characters. Bring on the next book!