Murder on the Horizon by M.L. Rowland 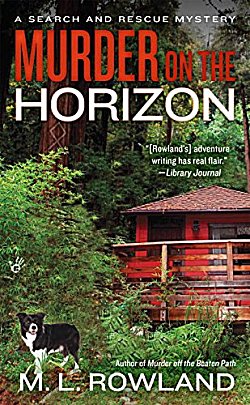 In the middle of a search in the blast furnace heat of the Mojave Desert, Gracie Kinkaid and her Search and Rescue teammates discover something no one ever wants to find: a trash bag containing human body parts. Shortly thereafter Gracie comes in contact with a group of extremists through her budding friendship with a chronic runaway named Baxter. It's the sort of contact that has explosive results as wildfire races through the tinder dry area of Timber Creek.

M.L. Rowland's Search and Rescue mystery series became a favorite of mine from the very first book, Zero-Degree Murder. Rowland is extremely adept at writing action sequences that have you turning the pages as fast as you can go.

But most of the reason for my preference is her main character, Gracie Kinkaid, a very likeable, intelligent, and brave young woman who loves to help others. (Through her, readers also learn how to prepare for emergencies.) Gracie has several personal issues to deal with in Murder on the Horizon: her mother, her stepfather, as well as Rob and Ralph, the two men in her life. Her personal issues are made more difficult because she feels as though she's at a crossroads in her life, and she's not sure what she wants her future to hold. Of course, all heroes have flaws, and one of Gracie's is her impulsiveness. There's a scene with one of the extremists in which Gracie puts herself in unnecessary danger-- a situation that certainly had me wanting to have a heart-to-heart with her about the wisdom of zipping her lip.

Yes, I enjoyed all the action sequences, and yes, I enjoyed putting my nose right in the middle of Gracie's business, but another thing that I found a lot of pleasure in was the relationship between Gracie and Baxter, the little boy who kept running away from his father and all the other extremists in the compound tucked away in the forest. Baxter is funny, smart as a whip, and sometimes very exasperating. A little boy caught in a situation not of his making when all he wants is to be "typical." Baxter made me laugh, and he broke my heart.

Murder on the Horizon has an ending that made me wonder what is going to happen next. One thing I do know for certain is that I hope I'll be seeing Gracie again soon.