Death in August by Marco Vichi 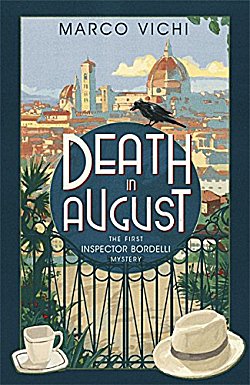 First Line: Inspector Bordelli entered his office at eight o'clock in the morning after an almost sleepless night, spent tossing and turning between sweat-soaked sheets.

It's the summer of 1963 in Florence, Italy, and Inspector Bordelli is one of the few detectives left in the city. If it weren't for the relentless heat, he'd really enjoy the nearly deserted streets. As it is, he is looking forward to a holiday at the beach once everyone else has returned to town.

The only thing to keep him from routine paperwork is the death of a wealthy elderly woman. Her companion says the woman was murdered. The postmortem is in favor of natural causes. However, once Bordelli begins looking around inside the dead woman's villa and taking a look at the woman's family, he very quickly sees that things just don't add up. With all this heat, Bordelli can't sleep anyway, so he may as well solve a murder.

When I saw that Death in August was translated by Stephen Sartarelli, I could have done a happy dance. Sartarelli is a superb translator, and I love the work he's done with Andrea Camilleri's Inspector Montalbano mysteries. Then I began to read. I was hooked by page three and the description of Bordelli's meeting with his boss. There is wit and humor in this book, and I loved every bit of it.

Inspector Bordelli is fifty-three, and although he's still looking for Miss Right, he's beginning to wonder if he's too old for her. His investigation is not told in a linear fashion either, but interspersed with his dreams, his childhood memories, and memories of fighting in World War II.

Although the heat could be considered a character in this book, I was rather disappointed that its setting of Florence didn't have a more commanding presence. However, the most charming scene in Death in August is the dinner party Bordelli has for his friends. Not only is it a celebration of wonderful food and drink, but quite an eclectic-- and happy-- gathering of people as well.

The investigation quickly proves that Bordelli doesn't have to figure out WHOdunnit, but HOW they done it, and the way he does so is rather ingenious and certainly entertaining. Piras, the young policeman who helps him solve the crime, brightens things up for Bordelli, especially when the inspector finds out he is the son of his old war buddy.

Although there are some similarities to Camilleri's Montalbano mysteries, I did not find this book to be a pale imitation. In its own way Death in August is every bit as good as its Sicilian counterpart, and I certainly look forward to reading more.