At The Poisoned Pen with Rhys Bowen! 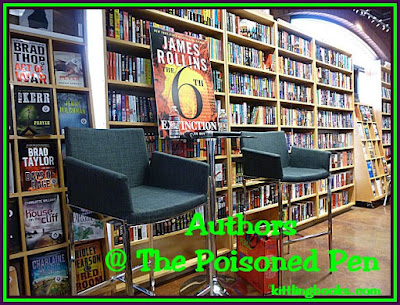 I had a feeling that when Denis and I got in the car and headed to The Poisoned Pen he would ask me how long it had been since the two of us had gone there together, so I was ready with my answer. "May 21 for Alex Grecian." Was I ever glad to have my Poisoned Pen buddy with me again!

Sure enough, when we walked in the door, all the staff at the front desk welcomed us. Since I'd been there recently, they all wanted to know if Denis had been all right. It's nice to be missed at one of your favorite places, isn't it? Denis took a seat in the back, I reserved our seats for the event, and then did my usual browse-buy. (Of course!)

The staff was hopping because there's always lots to do. A new employee was being shown the ropes. Ariel was busy attaching price tags to t-shirts. PK stopped to chat with us for a minute. I was enjoying myself watching all of them and almost forgot to read my book, which is saying something because it is the newest addition to my Best Reads of 2015 list.

In no time at all, people began showing up for the event. A line formed at the front desk with people buying Rhys Bowen's latest Royal Spyness book, and Denis and I were joined at the back by a fellow book lover who's come to several of the same events over the past few years.

I'd lost track of time, but when I saw Rhys come in and start making sure that the food and drink table was filled with plenty of mouth-watering goodies (she brought the wine), I knew it had to be time to begin. Malice at the Palace was about to be launched at The Poisoned Pen!

Host and bookstore owner Barbara Peters began by thanking all of us for braving a heat advisory to come to The Poisoned Pen. (It was only 112°.) Then she got right down to it, describing Malice at the Palace as "a country house murder-- just in a palace. And don't you just love the title?"

"I've always wanted to use that title at least once in my life," Bowen laughed. Kensington Palace figures prominently in the book, and Bowen began showing us several photographs she had taken there.

Bowen had seen William and Kate's apartment in Kensington Palace when it was home to Princess Margaret. "It was really rather plain then." When Peters asked her about the ghosts, Bowen told us that three ghosts are reputed to haunt the palace: King George I, Peter the Wild Boy, and King George I's daughter Princess Sophie who is supposed to be trying to find the baby that was taken from her. "I didn't see any of them," she said.

We diverted onto the royal succession highway for a moment when a fan asked about Lady Georgie marrying Darcy. After the last Stuart monarch died, the succession was changed so that no Catholic could reign in England. Darcy is Catholic, so if something catastrophic happened and thirty-fifth-in-line-to-the-throne Lady Georgie was faced with a coronation, there would be a problem if she were married to Darcy.

Kensington Palace has several "grace and favor" apartments for elderly royals and the like. At the time of Malice at the Palace, the Prince of Wales called it "the anthill" because two of Queen Victoria's daughters and two other elderly women were living there.

Barbara and Rhys had all of us laughing when Barbara mentioned King George III, who had a "very ugly wife but did his duty and they had fifteen children."

"Then he did his duty rather well," Bowen quipped.

Bowen was able to talk to one of the employees who worked at Kensington Palace, and she asked him if he'd ever seen any of the ghosts purported to haunt the residence. He talked of going into one apartment one evening to turn off the television. He heard something, and when he turned around, a woman dressed in black was standing there. She said, "I once was blind, but now can see." He left the apartment immediately, and asked his father to turn off the television. "I'm not going down there for love nor money!" his father replied.

When the latest Royal Spyness mystery begins, Lady Georgie is back from the United States. She's broke and staying at Belinda's place. At this point, Rhys read an excerpt from the book that had us all laughing-- and chomping at the bit to read the book for ourselves.

Malice at the Palace involves a real royal wedding, and we now settled into a delightful session of salacious palace gossip so we would have the proper background for the book. The gossip concerns the handsome Prince George, Duke of Kent, who was what we might call a switch hitter. Among his amours were Noel Coward and Barbara Cartland.

Peters told us an anecdote about Cartland, who lived to a ripe old age. "She became a rather large woman, but she had a beautiful face," Peters said. "When asked about it, Cartland told her interviewer that 'After forty a woman has to choose between losing her figure or her face. I have chosen my face.'"

In an attempt to quell gossip and settle him down, it was decided that Prince George would be married to Princess Marina of Greece, which is where Lady Georgie comes in. She is supposed to accompany Marina and see that she gets settled in properly. Lady Georgie and Princess Marina are coming home when they come across the body of a young woman-- a former mistress of the Duke of Kent.

"It was a bit tricky writing this book because it puts the royals in a bad light, but everything is based in fact," Bowen said.

Where will the future take Lady Georgie?

The devoted Darcy fan in the audience asked if Darcy appears in Malice at the Palace. "Darcy shows up, but not in a way you'd like," Bowen replied to "Oh oh's" and "tsk's" from the Peanut Gallery.

Someone then mentioned Georgie's mother-- who's "been many things to many men on six of seven continents." "She's divorced now," Rhys told us, "but it's closer to 1939, and I'm hoping she sees the light about the German millionaire with whom she's infatuated.

"This series is funny and it makes you laugh, but we're getting closer and closer to World War II. I have to seriously think about how deep and dark I want to go."

Bowen is thinking of taking Georgie to Africa, especially because of the Happy Valley set in Kenya-- "As long as she doesn't shoot Cecil the Lion.

"There's been all this uproar over Cecil the Lion when there are children dying of AIDS all over Africa," she continued. "Personally I think the woman who killed the giraffe did an even more horrendous thing. Giraffes don't hurt anyone. They're lovely!"

It was time to get back to Georgie, and one fan asked about Queenie, which made many of us smile and chuckle. "Queenie's going to do horrible things in every book until I get rid of her!" Rhys exclaimed with a twinkle in her eye.

Another fan remarked that she'd like to see more of Georgie's grandfather in future books. Bowen nodded and smiled. "Georgie's granddad is my favorite character.

"And in case any of you are wondering, I'm one hundred pages into Crowned and Dangerous-- although I don't know if they're going to let me keep that title. Georgie's life will be turned upside down!"

Talk turned to various things Georgie could do in future books. Bowen reminded us that times were tough in Britain for a long time after World War II ended. Rationing lasted through 1953. "I visited Bletchley Park, and it's fascinating," Bowen said. "Georgie would be an excellent candidate for Bletchley. They tended to recruit from the upper classes because they had university training and were used to dealing with high caliber decision making of all sorts."

Barbara and Rhys just kept thinking of so many things that Georgie could do that our minds were beginning to spin with all the possibilities. Finally Peters exclaimed, "There-- you've got enough to write loads of Georgie books!"

Rhys laughed. "I could write until Georgie turns 65 and begins collecting her OAP [Old Age Pension]!" It sounded wonderful to us so we applauded and cheered to let Rhys know how we felt about the matter.

Winding Down & Where's My Cot?

In the 1990s, Princess Alexandra of Kent visited Arizona, and although she had all sorts of official functions to attend, she was asked, "What one thing would you like to see while you're in the Phoenix area?" To Barbara Peters' amazement, Princess Alexandra said, "I'd like to go to The Poisoned Pen."

At the time, the bookstore had yet to move to its present location. While all the employees were passing their security checks and customers were informed that they would not be able to come into the store while the princess was there, Barbara was choosing a gift for the royal. She thought a copy of the interview she'd done with P.D. James would be appropriate. It was obvious by the expression on her face that this was a special memory for Barbara, and that led to Rhys sharing one of her own.

When Rhys Bowen was eighteen, she was a member of a group that had tea with Queen Mary. There was an absolutely fabulous spread laid out before them, but Rhys and everyone else in the group had been warned that they could only eat what the Queen ate. Many went hungry that afternoon, for Queen Mary only ate one piece of brown bread!

When a fan asked about the character of Fig in the Royal Spyness series, Bowen let us in on a little secret: "Fig is really one of John's [her husband's] cousins!"

Bowen's Molly Murphy Christmas novella, Away in a Manger, will be released in November, and she will be at The Poisoned Pen to celebrate its launch. The more Barbara Peters spoke, the more I drooled....

Friday, November 13 (Friday the 13th is always my lucky day), Rhys Bowen will be at my favorite bookstore along with another favorite author, Stephanie Barron, and we all shall have evening tea.

The very next day, there will be another superb lineup for afternoon tea: Jenn McKinlay, Kate Carlisle, Donis Casey, and Betty Webb! And if that weren't enough, Sunday would put a cap on the weekend with a visit from Anne Perry and Charles Finch. Wow. Just. Wow.

As soon as Barbara finished with those announcements, Denis looked at me and said, "Well I won't be seeing you for three days!" And yes-- I already have those dates marked on my calendar!

On that bright note, the evening was at an end. We finished up the wine, tea, and mouthwatering pastries. Denis walked over to the Cornish Pasty for our dinner, and while he did that, I had my book signed and then chatted for a few minutes with Donis Casey.