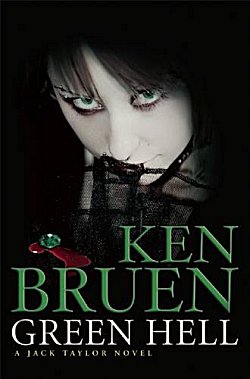 But then almost every day begins badly for Jack Taylor. Once again he's hit rock bottom. Of his two best friends, one is dead and the other refuses to speak to him, and he's given up battling his addictions to alcohol and pills. You might be forgiven for thinking that Jack Taylor spends most of his time lying comatose in some dark room, becoming conscious long enough only to stumble out for more booze and drugs.

Wonder of wonders, he's taken up a vigilante case concerning a respected professor of literature at the University of Galway. Seems the respected man of letters has some very nasty tendencies that other men higher up on the success ladder than the rest of us are more than happy to overlook.

Jack Taylor has never ignored anything like that in his life, and what's more he has a sidekick this time around. After being saved by Jack from a couple of thugs, a young American on a Rhodes Scholarship has abandoned his thesis to write a biography of his savior. This isn't a recipe for success. Just when everything has begun to spiral out of control, in walks an edgy young Goth named Emerald. But... is Emerald the solution or part of Jack's problem?

I've been a fan of Ken Bruen's wonderful noir Jack Taylor books since the very first, The Guards, and I doubt that I will ever forget my reaction to the gut-wrenching ending of The Dramatist. This is not a series to read when you're feeling low and needing a pick-me-up. Jack Taylor may have the soul of a poet, but he has enough flaws for two people, his addictions will always be with him, and he can turn extremely violent in the blink of an eye. But there's something about the way Bruen writes this man that makes me care deeply for him, regardless of how lost or hopeless he is. Jack is lost, Jack is hopeless, for the simple reason that he cares so much, and it's a difficult thing to watch someone whose heart and intentions are so good continue to do things that can be so bad.

In Green Hell, once again Jack is dealing with someone who's seemingly above the law. As far as he's concerned, he has nothing to lose, so he welcomes the chance to mete out some long overdue justice. Since Jack no longer has friends, Bruen has paired him up with two opposites: a naive young American and a mysterious Goth girl. Having been saved from what could've been a deadly beating, Boru Kennedy is a young American who's completely under Jack's spell. To him Jack may as well be an Irish Don Quixote tilting at Galway's windmills of injustice. Kennedy's thesis on Becket used to take up his every waking thought, but now he can't get enough of Jack, and through his obsession, readers get to see Taylor through completely new eyes.

Emerald the Goth girl refuses to be pinned down. Is she temptress, joker, damsel in distress, or the purest form of retribution? Jack seems a bit dazzled and unable to make up his mind just what she's up to-- or if she's up to anything at all.

With its new sidekicks, Green Hell has a different feel-- an almost retrospective one-- to the other books in the series, and I enjoyed little touches like Ziggy and a postcard about The Poisoned Pen bookstore. But Jack is a bit too much out of control in this one, and as a result the book doesn't have the full power of several of the earlier books. But it's impossible for me to stop in Ireland without going to Galway to check on Jack Taylor. He's the kind of guy you never ever forget-- and one that you never stop hoping will have just a tiny smidgen of good luck. Just once.