A Trace of Smoke by Rebecca Cantrell 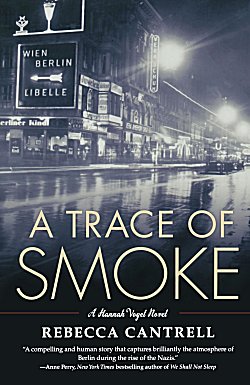 First Line: Echoes of my footfalls faded into the damp air of the Hall of the Unnamed Dead as I paused to stare at the framed photograph of a man.

All crime reporter Hannah Vogel is after is something interesting that she can write up for the newspaper, but as she walks through the Hall of the Unnamed Dead, what she finds cannot be printed: a photograph of her beloved brother's body. Hannah can't even claim the body for she doesn't have the necessary identification papers. All she can do is try to find his killer until her papers are in her hands once more.

The task is far from easy. It's 1931 in Berlin. It's tough to even survive, and the Nazis certainly aren't making it any easier. Ernst's lifestyle complicates matters as well. He was a cross-dressing singer in a seedy nightclub; a beautiful young man with many secrets, many lovers, and many opportunities to get into trouble. When five-year-old Anton appears on Hannah's doorstep claiming that she is his mother and Ernst is his father, all Hannah can think is, "What next?" The hunt for Ernst's killer and Anton's real parents takes Hannah right to the top ranks of the Nazi Party. If she takes one wrong step she won't be the only one to die-- little Anton will, too.

I've heard nothing but good things about Rebecca Cantrell's Hannah Vogel series, and I finally decided that it was time to put all that praise to the test. A Trace of Smoke passed with flying colors. What a sense of place and time! Reminiscent of "Cabaret," yet so much more. Cantrell makes crystal clear the grinding poverty, the sense of desperation and hopelessness that the vast majority of Germans had to face each and every day. Looming over all is an almost overwhelming feeling of tension and dread-- mostly brought on by my own knowledge of what is to come. That, to me, is one of the strengths of this book: Cantrell doesn't spell out this foreboding; she knows enough to state the facts and let the readers supply it for themselves.

Hannah is hampered in what she can do to investigate her brother's death because of her lack of identification. The reason why she doesn't have it proves which side of the Nazi question she's on. Furthermore, yes, her brother Ernst's life was "exotic," but that isn't the real issue here. His presence is clearly felt throughout the book because of Hannah's love and grief. I felt I knew this young man even though he's never seen alive. Another strong character is little Anton. He's an extremely brave, intelligent little boy who's experienced too much during his five years on earth.

Hannah is both the strength and the weakness in this book. The picture she paints of her world is vivid. I experienced what she lived through as I read each chapter. But Hannah's inner thoughts are a bit clunky from time to time. Too many scenes end with her in tears or almost in tears. It's far from being a deal breaker for me. If I had to live through what Hannah did, I'd be exhausted and probably on the verge of tears even before my brother was murdered.

What matters is that I was completely lost in Rebecca Cantrell's setting, characters, and story. She shows the best and the worst of the German character. In A Trace of Smoke, decent Germans-- Jew and Gentile alike-- are set against the Nazis, and I have to know what happens next.