This Old Homicide by Kate Carlisle 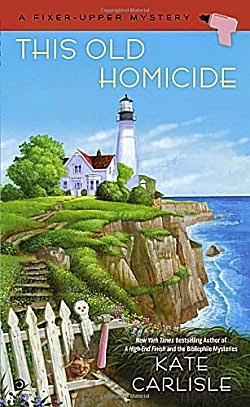 One of Shannon Hammer's closest friends has just bought a Victorian house in dire need of renovation, and Shannon is looking forward to her construction company taking on the job. It might mean a bit of schedule tweaking, but that's something she can handle with ease. What's not so easy to deal with is checking on her elderly neighbor Jesse Hennessey and finding him dead in his home. Even worse-- Shannon realizes that his house has been ransacked.

It's suggested that a thief was looking for treasure that Jesse says he found while diving on the wreck of an old sailing ship. After all, Jesse had been a Navy SEAL. But he was also known for his tall tales. When Jesse's death is ruled a homicide, suspects start popping up like leaks in old plumbing, and Shannon just can't resist lending a hand in finding a killer.

For my money, Kate Carlisle's two-book-old Fixer-Upper cozy series is her best. Readers get a beautiful coastal California setting complete with beaches, redwoods, a lighthouse, and wonderful old Victorian houses, as well as a strong cast, and writing tips from one of the characters. Combine all that with This Old Homicide's tales of shipwrecks and hidden treasure, and what's not to like?

Carlisle doesn't forget that her main character has to work for a living, so readers are treated to regular visits to old homes being renovated. Shannon knows her stuff, so she's seen working alongside her crews, and along with renovation tips she shows us how to take care of scheduling, supplies, permits, and all that other "fun" stuff.

Shannon's an endearing character, and I'm really enjoying getting to know both her and her best friends. I can even tolerate Shannon's nemesis because, while Whitney is an obnoxious cow, she's not over the top. I think Carlisle's giving Whitney a genuinely nice guy as a husband helps temper my reaction to her.

Shannon's one lucky woman for she's been blessed with not one but two thoroughly handsome, smart, and funny guys. When this budding romantic triangle began to blossom in the first book, I was wary because one of the reasons I stopped reading Janet Evanovich's Stephanie Plum books a few years back is because Stephanie refused to make up her mind-- Joe or Ranger? Unlike Stephanie, Shannon can make up her mind, probably because she runs a successful business. She also has a very strong sense of what's right. She knows she has to make a decision. I'm looking forward to seeing how Carlisle deals with the situation. It should be very interesting. Do I know which guy I'd pick? Yes, I do!

Carlisle's mystery-- especially with the added bonus of a shipwreck and hidden treasure-- is a good one, even though I did think the identity of the killer was a bit obvious. For as most cozy readers know, it isn't just about whodunit; it's got even more to do with the characters-- and Carlisle's got both a winning cast and a winning series.