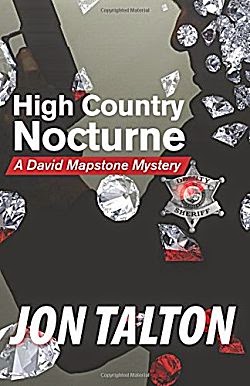 First Line: In the end, the truth was almost beside the point.

Private investigator David Mapstone has a tough decision to make when a shipment of diamonds is stolen in Phoenix and the #1 suspect is his partner, former Maricopa County Sheriff Mike Peralta. Should he cooperate  with the FBI, or should he strike out on his own to find Peralta and learn what really happened?

Actually the decision really isn't all that tough, but Mapstone's plan of action is made more difficult by the new sheriff wanting him back as deputy to use his expertise in history to solve a special cold case.

Matters turn from bad to worse when Mapstone is stalked by a professional killer whose specialty is "suiciding" targets.

There's no doubt about it: David Mapstone is going to have to risk it all to find the truth.

In High Country Nocturne, Jon Talton's elegiac descriptions of the old Phoenix almost gives the book a hard-boiled feel, and that sad, cynical, resigned tone is perfect for this story. It's good to see Talton get out of Phoenix for a bit and take readers to places like Flagstaff and Ash Fork up in Northern Arizona. Even sections of Route 66 get a mention or two. In a tale of betrayal, murder, and a desperate search for the truth, the occasional sparks of humor he adds are as welcome as they are unexpected.

Mapstone has been tested before in the course of this series, but not to this degree. Mike Peralta has not only been his boss and his partner, he's also been his closest friend, and to have him be the prime suspect in a diamond heist and murder is beyond belief. At this point, all he's going to want to do is prove Peralta innocent. However, everyone seems determined to stop him. FBI agents are crawling all over the place, making demands, asking questions, keeping an eye on him. The new sheriff insists that Mapstone comes back to work for him. Matters are made even worse by the deadly killer who's stalking him. What scares Mapstone the most is that the killer may not only target him, his wife Lindsey may also be in danger.

When he does start piecing a few things together, he begins to doubt his friendship with Peralta. Just how much can he trust his partner? This is a fast-paced story that does make occasional references to previous books in the series, but it does stand alone very well.

There are two authors who have series set in the Phoenix metropolitan area whom I always recommend. Jon Talton is one of them. High Country Nocturne is another strong entry in an excellent series.