The Question of the Missing Head by E.J. Copperman/Jeff Cohen 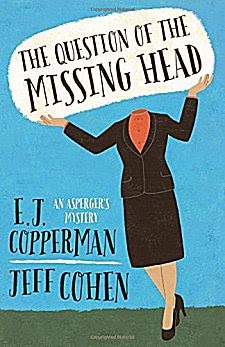 When Janet Washburn picked up the phone to call Questions Answered, she had no idea that she was about to enter into a possibly life-changing event. What she thought would be a quick question about the New York Times crossword puzzle turned into a trip to the business to deal with its owner in person. Samuel Hoenig has Asperger's Syndrome, and although he can find the answer to just about anything you'd want to know, you have to be able to ask the right questions.

Once there, Janet forgets what she wanted to know and finds herself helping Samuel with a complex baseball question. In walks Marshall Ackerman with a question of his own: who stole a preserved head from the Garden State Cryonics Institute? It's a question that has Samuel's investigative juices flowing. When he and Janet go to the Institute, they find that the theft has escalated to murder. Can Samuel's powers of deduction uncover a killer?

The Question of the Missing Head is a story that I enjoyed from first page to last. Its convoluted (but not confusing) mystery was so much fun to follow, and it had a lot to do with the characters that Jeff Cohen has created.

Samuel is marvelous-- at times exasperating, brilliant, startling, and downright funny. What I didn't find all that unusual is that I identified with him in a few things like ringing telephones and surprises. He owes a lot to the love and parenting of his mother, who has one of the best lines in the book. Cohen not only shows Samuel's strengths, he shows his weaknesses as well-- and I'm with Samuel on sudden, earsplitting noises that won't stop (although I don't react in quite the same way).

Samuel is also very careful to clear up any confusion with television's Adrian Monk, which might help a few readers. His passions are baseball and the Beatles, and I love his theory that he can tell a lot about a person by discovering their favorite Beatles song. I even wonder what Samuel would tell me if I said "In My Life"?

Out-of-work photographer Janet Washburn is the perfect associate for Samuel. She doesn't overreact to any of Samuel's peculiarities, and the conversations she's able to have with him about subjects like his mother and the investigation into the death at the Institute are both illuminating and touching. These talks tell readers a lot about both characters.

I was momentarily alarmed when Detective Lapides arrived on the scene because I thought the book was going to be saddled with the resident too-stupid-to-live cop. I should have known better. In Lapides Cohen has created a police officer who might not be the sharpest knife in the drawer, but he knows his limitations. Lapides wants to do a good job, and he's willing to follow Samuel's good advice which many other detectives wouldn't have the sense to do.

And because Samuel's priorities are different from most people's, he doesn't get upset at one point when the investigation starts to bog down. What's more important than the investigation? You're just going to have to read the book to find out.  This first Asperger's mystery got me hook, line, and sinker, and I look forward to Samuel's next investigation... err... question.