The Gearing Up for Giveaways Weekly Link Round-Up 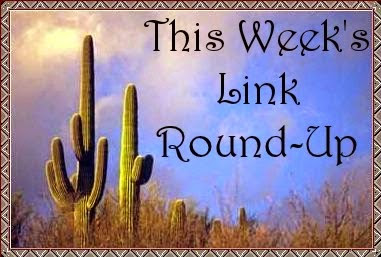 We're having some unusual weather here in Phoenix: below normal temperatures, overcast, and rain. Normally the summer is gearing up, it's getting quite warm, there's not a cloud in the sky, and it's dry as a bone. We need the rain, so I'm not complaining-- especially since our twelve foot tall leaning cactus has been straightened-- I just hope that this rain now doesn't mean we won't have a monsoon season. 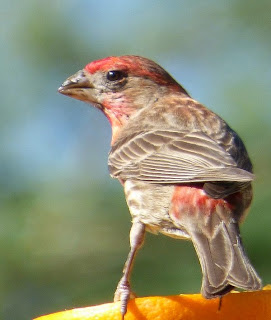 The weather certainly hasn't slowed down all the birds that visit Casa Kittling, like the male house finch you can see to the right. It can't slow them down because they have too many mouths to feed. I can put out three to four oranges per day, and between parents and those young feeling confident enough to fly over and perch, every bit of the juicy fruit is eaten. I've learned quite a bit about bird behavior just from watching them around the feeders and bird baths.

Next Monday you'll be seeing instructions for a giveaway. I picked up a few goodies from the Death on Demand Party at The Poisoned Pen last Saturday, and I'm going to share them all with you. The first giveaway will be Monday, and the rest will follow, one at a time, on Kittling: Books' Facebook page.

But enough about birds and giveaways. Here are this week's links!