Six and a Half Deadly Sins by Colin Cotterill 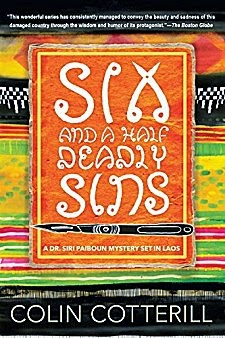 First Line: On December 25, 1978, the concrete public-address system pole in South That Luang's Area Six unexpectedly blew itself up, a Lao skirt with a severed finger sewn into the hem passed through the national postal system unchallenged and Vietnam invaded Cambodia.

Dr. Siri Paiboun, the former National Coroner of Laos, wishes he could enjoy his retirement, but with a house filled with less fortunate friends and acquaintances, it's difficult. When he receives an unmarked package in the mail that contains a handwoven pha sin (a colorful traditional skirt worn in northern Laos) with a severed human finger stitched into the hem, he jumps at the chance of taking a mystery-solving road trip. Using the wiles that make him such a formidable investigator, Siri finagles transportation north to where the skirt was made. He has no idea that he's just undertaken a deadly scavenger hunt right in the heart of a political powder keg.

From its punny title to its very last sentence, I loved immersing myself in the world of septuagenarian Dr. Siri Paiboun once again. There's no other character quite like him in all of crime fiction, and the rest of the characters Colin Cotterill has created are every bit as wonderful. Time has passed since the last book (The Woman Who Wouldn't Die), and the Communist government hasn't been kind to Dr. Siri's friends and former co-workers, but they're all managing to work with what they've been given. Moreover, it would seem that what they've been given is pretty dull because they're more than happy to help Siri in his latest investigation.

One of the things I love about this series is its glimpse into the culture of Laos and of life in a Communist regime. In Six and a Half Deadly Sins I learned what a precarious position Laos was in at that time due mainly to its location-- surrounded by Vietnam, Cambodia, Thailand, and China. Three of those countries would have been more than happy to gobble this poor country up, and all any of them would need was the smallest excuse.

The mystery in this book completely engaged my interest because it kept changing as more information was learned. No one is whom they appear to be-- even the good guys-- and this isn't always a bad thing. Cotterill kept me guessing, and he certainly had me worried for Siri's safety.

If you're new to this series, you should be able to read this book as a standalone and still enjoy it, but I would recommend beginning with the very first book, The Coroner's Lunch. What you'll learn about the culture and the time period is invaluable, but it's the humor and the characters who will take hold of your heart. Colin Cotterill's Dr. Siri Paiboun series is essential reading for me, and I sincerely hope that it becomes that for you, too.