Choked Off by Andrea Frazer 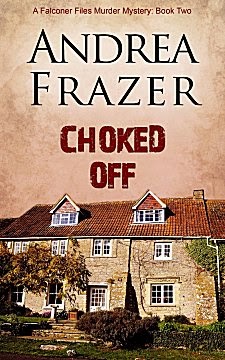 First Line: The posters had been up for a month, taped in windows, glued to village noticeboards and pinned to the walls of the public house.

The villagers of Stoney Cross have been preparing for their first Arts Festival in which all their talents-- painting, sculpture, writing, singing, dancing, and more-- can be showcased over a weekend. They hope it's the first of many festivals to come, and when they're able to enlist the help of a local radio broadcaster, their hopes skyrocket.

Unfortunately when that very same radio personality actually moves to Stoney Cross, the villagers learn that he is a mean-spirited, hypocritical drunk, and several realize that Marcus Willoughby has played parts in their pasts that they wanted to forget. When Willoughby is found dead in his new home, no one mourns, and when Detective Inspector Harry Falconer and Acting Detective Sergeant Davey Carmichael come to investigate, they have a long line of suspects. But murder isn't the only thing on Falconer's mind. One of the villagers has the inspector's thoughts turning lightly to love....

The first book in the Falconer Files series, Death of an Old Git, was a delightful surprise, filled with humor and wit, and I looked forward to reading this second book in the series. Unfortunately, it wasn't nearly as enjoyable. The plot of Choked Off follows the one in the first book exactly. The scene in a village filled with artistic residents  is set, the villagers are introduced one by one, and some obnoxious soul whom everyone hated is killed off. In walk Falconer and Carmichael who proceed to interview all the villagers silly until the killer is uncovered. Way too much formula for my taste.

The humor that I enjoyed so much in the first book is lacking in the second, which was a huge letdown, although I was glad to see that good-natured Carmichael is coming into his own despite the grumblings of the fastidious Falconer. Falconer falls in love for the first time, and his experience in the romance department reminded me of the fate of so many heroes in the television shows I watched as a child. As for the killer... for readers who don't take everything-- and everyone-- at face value, the reveal will come as no surprise.

If I hadn't enjoyed the first book so much I might not have finished this one. I've seen this author's way with words, and I don't find all that many writers who can make me laugh out loud, so instead of continuing with the Falconer Files, I'm tempted to sample her other series in a quest to recapture that sparkle.