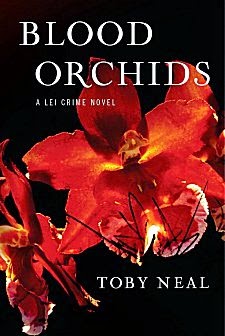 Police officer Lei Texeira had a deeply troubled childhood that will not leave her no matter how hard she tries to bury it. When she finds two murdered teenagers, she is greatly affected and becomes obsessed with finding the girls' killer.

As she becomes more involved with the investigation, she can't get over the feeling that she's being stalked, and this serves to throw her together even more with the new detective to whom she's becoming attracted. Lei's going to need all the protection she can get because the killer does have her in his sights.

Author Toby Neal paints such a lush and gorgeous picture of Hilo, Hawaii, that I wanted to board the first plane that would take me there. From its beaches to its christmas berry bushes to its fern forests to its "vog" (volcanic emissions from Kilauea), I just couldn't get enough. Hilo and its surroundings are perfect for a mystery series.

I also enjoyed the character of Dr. Wilson, the police therapist. In many ways the scenes between Wilson and Lei were the best in the book and showed Lei's true path to healing from her traumatic past.

There's a lot to like in Blood Orchids. In fact, that's the main problem: there's too much. There are murders, kidnaps, rapes, a stalker, people popping up from Lei's past, shootings, meltdowns, therapy sessions, a romance-- enough action for two books-- and I felt the story would've flowed much better if a few of these elements had been left out.

I also had doubts about Lei's effectiveness as a police officer. This character has emotional meltdowns that cause her to black out. Not a good thing when someone is supposed to be protecting and serving. At least by book's end Lei seemed to be on the brink of putting her past behind her.

I may have had my doubts about parts of Blood Orchids, but the book does have good bones. I'm certainly curious about Lei's next investigation, and who could turn down another trip to Hilo?