The Children Return by Martin Walker 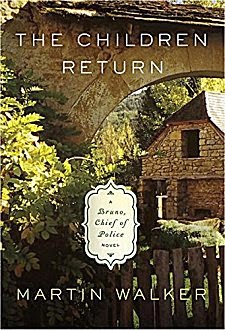 First Line: Benoît Courrèges, chief of police of the small French town of St. Denis and known to everyone as Bruno, had witnessed too much violent death.

Bruno is at a crossroads in his personal life, and it would seem that the small French village of St. Denis is at a crossroads of its own. Bruno is ready to settle down and raise a family, but none of the women in his life want the same thing. Those in charge of St. Denis have treated it like a treasure, but when an undercover agent on the trail of domestic jihadists is murdered right outside the village, it would seem that hatred and terrorism are trying to change the wonderful little town forever. This seems even more true when Sami returns. Sami is a local autistic youth who had been believed lost to Islamic extremism. St. Denis is suddenly right on the front line of the war on terror, and Sami is a pawn in a very deadly game.

One of the most charming things about the Bruno Chief of Police series has been that the small village of St. Denis seems lost in some sort of time warp, with more ties to the past than the present. In the tightly plotted seventh book in the series, the past and present collide to put a wary face on the future.

Published in the UK as The Children of War, this book is all about the effects of war upon our most vulnerable. Walker once again highlights southwestern France's part in World War II by weaving in a storyline about two Jewish children who were hidden away outside St. Denis during the Second World War. The surviving sibling wants to reward the villagers for their kindness and bravery, but first she must see what they would do with their "inheritance." As Bruno gets his group of planners together, it's a wonderful way to show how the past can have a beneficial effect upon the future.

We need that happier remembrance because Sami represents the horrors of the war with Algeria-- how that war still affects France, and the fate of so many Muslim immigrants that have flooded into the country. Walker shows us the differences between how France and the U.S. fight the war on terror by bringing in Nancy Sutton, an American intelligence officer. Of course where Bruno is concerned, Nancy won't be able to remain solely as an example of truth, justice, and the American Way. Will Nancy be the right woman for Bruno at this stage in his life? It's something that we're just going to have to watch play out.

And while we're keeping an eye on Bruno and Nancy and wondering if everyone is going to be able to keep Sami (the gold mine of al-Qaeda intel) safe, we still have time to sample life in St. Denis. This time it's the vendage-- the grape harvest-- with its special celebratory food and wine. By continuing to show us various aspects of the culture and cuisine of St. Denis, the author reminds us why places like this need to survive-- and why it takes people like Bruno to keep them safe. In talking about murder and mayhem, Martin Walker has created one of the best crime fiction series going-- one that reminds us of kindness, decency, and rich full lives.