Prospecting for Murder by Larry Names 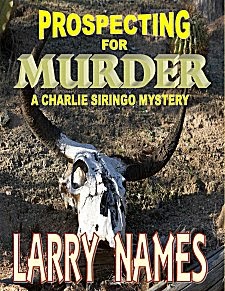 Deputy Walt Phillips has been murdered in one of the back alleys of Harqua Hala, a small mining town in Arizona. When the sheriff can't find the deputy's killer, he calls in some pretty high-powered help: ex-lawman Wyatt Earp. Earp also puts in a call for help from former Pinkerton agent Charlie Siringo, who welcomes the interruption from writing his memoirs.

After meeting in Wickenburg to talk strategy, the two men travel under assumed names to Harqua Hala, and it's not long before they find all sorts of suspects and not much proof. And there's a young fellow named George Patton who's nosing around town, too. Whatever's going on, the two seasoned lawmen are running out of time. It won't be long before President Theodore Roosevelt is in town.

I purchased a copy of this book shortly after it came out, but it rapidly became buried under all the other eBooks I downloaded to my brand new eReader. Recently when I was scrolling through all my acquisitions, I couldn't even  remember why it was there, so I opened it and began to read. From almost the very first page, I remembered. An historical mystery set in Arizona months after it came a state and featuring real-life figures Charlie Siringo and Wyatt Earp? I was hooked!

The mystery is a good one and certainly kept me guessing. I also enjoyed the journey through Arizona at the turn of the twentieth century-- especially through places like Harqua Hala, which has long been a ghost town. The author had me slapping off clouds of dust and hearing the jingle of spurs while I tried to figure out what was going on.

Unfortunately, a couple of things let down the quality of the writing. One was the fact that there were a few too many historical figures. Earp, Siringo, Patton, Bat Masterson, and Ben Kilpatrick from Butch Cassidy and the Sundance Kid's Hole-in-the-Wall Gang to name a few. Sure these folks may all have known each other, and may even have been in roughly the same place at the same time, but it would have freed up the story to have a bit more fiction and a little less history.

The other thing that let down the story quite a bit was the lack of proofreading and poor-quality formatting. The spelling of two characters' surnames changed back and forth throughout the book. When mines run out of ore, they don't "pay out," they "play out," and most maddening of all, one section of the book was liberally sprinkled with ¼'s.

Did I enjoy the story? Very much so. Names brought the Arizona of that period to life for me, and watching Earp and Siringo solve a mystery was fun. Would I read another of the author's books? Yes, I certainly would, but I would hope the proofreading and formatting would now match the quality of his writing. 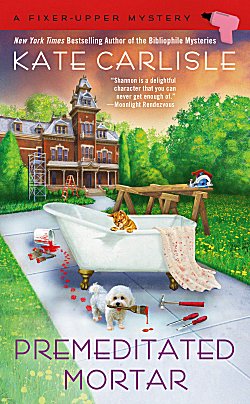