The Murder Quadrille by Fidelis Morgan 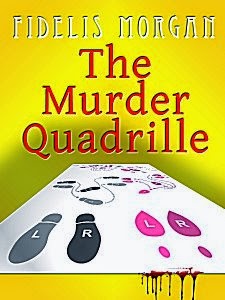 First Line: Halfway through the dinner party Sarah Beaumont decided that she would definitely leave Martin, her husband of ten years.

Sarah and Martin's marriage is growing weaker by the day, but at Martin's insistence, Sarah is once again chief cook and bottle washer for a dinner party. This time the guests are their bank manager, their lawyer and his girlfriend, and the mystery writer who lives next-door.

Things aren't going quite as smoothly as Martin would like, so to cover any lapses the guests begin talking about a dead body that was discovered on the Common. And isn't there a librarian missing, too? With spousal tempers running so high in the house, this may not be the best time to talk of murder!

I fell in love with Fidelis Morgan's writing when I feasted on her Countess Ashby de la Zouche historical mysteries set in London in 1700. Not only were the mysteries first-rate, the settings superb, and the characters so well-drawn that I'd instantly recognize them if I bumped into them on the street, I also found myself howling with laughter time and again. Is it any wonder that I wanted to see what this woman could do with a contemporary mystery?

I'm happy to report that, for Fidelis Morgan, time doesn't matter. She took every convention the mystery genre has to offer and stirred them together to create an absolutely wonderful piece of entertainment. The plot is the thing in The Murder Quadrille, so scarcely anything can be said about it without giving away the game. Suffice it to say that the story twists and turns on itself so often that you  may find yourself a bit dizzy from time to time. And-- unlike so many plot-heavy books-- the characters are not static, two-dimensional pieces of cardboard. Just when you think you know where the story is going, Morgan instantly changes speed, direction, and focus, and she does the same thing with her characters. Each dinner party guest has his own point of view (which is definitely not as unwieldy as it sounds), and just when you think you have a character buttonholed, Morgan shows you another facet of personality that has you guessing all over again.

The best thing of all is that, at the most unlikely times, I found myself howling with laughter. Or cheering a character on to get out of danger. Or egging another one on to do something he (or she) shouldn't. The Murder Quadrille isn't a book to be read and dissected in a grim, serious manner. No, this book is quirky and complex and sheer fun. My advice? Just hang on and enjoy the ride!