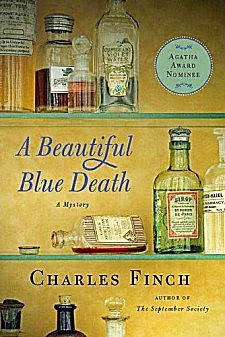 First Line: The fateful note came just as Lenox was settling into his armchair after a long, tiresome day in the city.

One of the few things that can get Charles Lenox away from his cup of tea, his book, and his fire on a bitterly cold day in London is a request from his friend, Lady Jane. One of Lady Jane's former servants is dead of an apparent suicide, but Prudence was engaged to be married, and Lady Jane doesn't believe she took her own life.

When Lenox takes a look at the dead woman's body and her room, he doesn't think the servant killed herself either, but the owner of the house wants the whole affair hushed up. She's just a servant, after all.

Lenox pays no attention and keeps on with his investigation. Prudence was murdered with a rare poison, and the house where she worked is filled with suspects. When another body turns up at a ball in the same grand mansion, Lenox knows he must find answers before the killer strikes again.

Charles Finch's first mystery to feature Charles Lenox moves a bit slowly from time to time, and the information he shares about such subjects as London gentlemen's clubs in the 1860s could be woven more smoothly into the narrative, but the positives far outweigh these two negatives.

A Beautiful Blue Death is filled to the rafters with memorable characters. Charles Lenox-- even if he's the "leftover" son and not heir to his family's title-- is a true gentleman in both his beliefs and in his dealings with people from all walks of life. In fact he believes so passionately in improving the lives of the poorer classes that he is thinking of becoming a member of Parliament. He's such a "good guy" that quite a varied lineup of people are willing to help him in his investigations.

One of the people who helps him most is his faithful butler, Graham. Graham not only keeps Lenox's household running smoothly, he's more than willing to do anything Lenox may require during these cases. Equally willing is Lenox's friend McConnell, a slightly disgraced doctor who comes in very handy for medical advice and telling post-mortem details.

Last but not least is Lenox's dear friend, the widowed Lady Jane. Lady Jane's husband died quite some time ago, and she's had offers, but she's discovered that she enjoys  the freedom to be herself that widowhood allows her. Her reputation is such a strong one that everyone overlooks her occasional eccentricities. The friendship between these two is very deep. In fact, it's actually love, but only time will tell if they decide to act upon their feelings.

The mystery in A Beautiful Blue Death is two-pronged. I found one of the "prongs" to be easily guessed, but I forgot one of the major tenets of crime fiction and let the identity of the killer slip through my fingers. Oh well. That's what happens when I enjoy a cast of characters so much-- and I'm definitely looking forward to reading more books in this series!