The Chessmen by Peter May 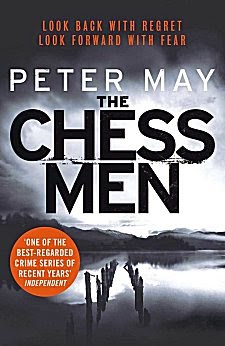 First Line: He sits at his desk, grey with fear and the weight of this momentous step which, once taken, cannot be taken back.

In the conclusion of Peter May's superb Lewis trilogy, ex-Detective Inspector Fin Macleod is living on the Isle of Lewis in the Outer Hebrides of Scotland and working as a security officer for a local landowner. Large-scale poaching is being conducted on the estate, and during the course of his investigation Macleod runs into former childhood friend Whistler Macaskill.

The two men witness a "bog burst"-- a freakish natural phenomenon that drains the water out of a loch-- and see what is uncovered: an aircraft containing the remains of Roddy Mackenzie, rock star and friend who disappeared over seventeen years ago. Macleod almost misses seeing the look on his friend's face. Whistler isn't shocked. Whistler has been hiding a secret, and Macleod realizes that, sooner or later, he's going to have to learn the truth.

The atmospheric setting of the Outer Hebrides, the characters, and the story kept me glued to the page. If setting is important to you, Peter May's Lewis trilogy is tailor-made for you. The Isle of Lewis should be listed in the cast of characters, and May always seems able to find something about it that will illuminate and set the mood. In The Chessmen, it's the frightening and eery bog burst. As the water drains out of the loch, secrets are uncovered, and Macleod will have his hands full with one secret after another throughout the book.

The Lewis trilogy has dealt with other secrets, and this final book is no exception. It's as if Macleod has to clear everything up from his past before he can really make a fresh start. (Just as we do in real life.) Here the secrets revolve around his late teens and early twenties when he was a roadie for an up-and-coming Celtic rock band. Whistler Macaskill was a member of the band, and his life has also been shadowed with secrets that will have an effect on his young daughter Anna Bheag ("wee Anna").

It's fascinating to see how the lives of all the various characters mesh together, and how each secret has made a lasting mark on them. The entire book is a feast, but the highlight for me was Fin's speech before the church board at the end. It was filled with truth, it was emotional, and it was oh so right. I would've cheered when Macleod was finished, but the lump in my throat was too big.

You could probably read The Chessmen as a standalone without too much difficulty, but I wouldn't advise it. The entire trilogy is a reading experience that should not be missed.

Police Procedural, #3 in the Lewis Trilogy
Rating: A+
Source: Purchased at The Poisoned Pen.