Someone to Watch Over Me by Yrsa Sigurdardóttir 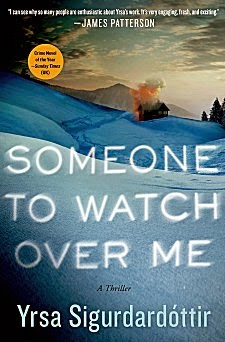 First Line: The cat was keeping a low profile, concealing itself in the darkness behind the dense but leafless bushes.

Jakob, a young man with Down's Syndrome, has been convicted of burning down his assisted living facility and killing five people, but a fellow inmate at the secure psychiatric unit believes Jakob is innocent and hires Thora Gudmundsdottir to prove it. Thora knows that the best way to achieve this goal is to work to uncover the identity of the real killer. Fortunately the economic downturn in Iceland means that she has the time to devote to this case because the further she probes, the more lies and cover-ups she discovers. It doesn't take long for Thora to believe that Jakob is innocent, too-- and that means she must fight even harder to see justice done.

Yrsa Sigurdardóttir has created a superb, multi-layered plot with enough twists and turns to keep even the most devoted crime fiction fans guessing. As always, Thora's personal life intrudes on her investigation. In Someone to Watch Over Me, her parents move in her already crowded house to disrupt everyone's routine. Fortunately for the story, Sigurdardóttir touches on this situation sparingly, its main result being to chase Thora's unemployed partner Matthew out of the house to help her with the investigation.

The focus is on the investigation, and it's a difficult one. Some of the people Thora should interview are dead. Some of them have things to hide. And some of them have disabilities that make communication almost impossible. Having a psychotic killer hire Thora to reopen Jakob's case is brilliant. Readers may well be left in a quandary. Is this man truly doing this out of the small bit of goodness left in his heart-- or does he have his own agenda that Thora must contend with on top of everything else?

Woven throughout the story is the small satin ribbon of a subplot involving the hit-and-run murder of a young woman. The reader is left to wonder what this has to do with Thora's investigation. Does the young woman's death tie in with Jakob's case? If it does, then how? And bewilderment isn't the only thing this subplot adds to the story. It adds fear and menace-- the perfect "creep factor" to raise the hair on the back of your neck.

The only thing that marred this book for me was that the pacing was uneven. In places it was extremely slow and almost brought everything to a screeching halt. But by book's end, I could only shake my head in disbelief. What a fabulous, intricate plot! Thora and Yrsa Sigurdardóttir have done it again. Bravo!

Someone to Watch Over Me by Yrsa Sigurdardóttir
Translated from the Icelandic by Philip Roughton
ISBN: 9781250051479
Minotaur Books © 2015
Hardcover, 336 pages