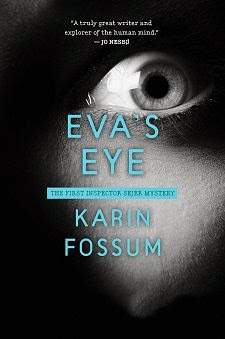 First Line: It was a Wendy house.

A mother and daughter are walking by the river when they discover a man's body in the water. The mother doesn't want to get involved, but her young daughter insists that something must be done. The mother-- Eva-- goes to call the police, but when she gets to a phone, she calls someone else instead. The body is found anyway.

Inspector Konrad Sejer has two baffling cases on his desk that must be solved. The man, Egil, died as the result of a violent attack, but he's been missing for months and any trail has long gone cold. The second case involves the murder of a prostitute whose body was found just before Egil went missing. Nothing but dogged police work will solve the two cases, so Sejer knuckles down and begins piecing the slender clues together. It's not too long before he begins to realize that these two cases may be connected after all.

I have often bemoaned the fact that American publishers have the annoying tendency to release European mystery series books out of order. This was done in the case of Karin Fossum's excellent Inspector Sejer series. Eight books were published before Eva's Eye, which is actually the first. For once I'm glad that they weren't published in the proper sequence. Konrad Sejer is one of my favorite police officers, but if I had been introduced to him with this book, I doubt if I would have continued with the series.

The reason for this is because Eva's Eye has everything to do with the character of Eva Magnus and little to do with Konrad Sejer. Everything revolves around Eva's eye: her art (in which Sejer seems to be the only person who sees something meaningful), her young daughter Emma, how Eva views her life... everything. Eva Magnus is a fascinating character who grabs the focus of the book and runs away with it. As is also seen in The Murder of Harriet Krohn, Fossum seems to like to focus on a different character from time to time.

In comparison Konrad Sejer is merely interesting.  If I'd read this book first, I would have admired Fossum's characterization of the title character and given a passing nod to Sejer's determination to solve these two puzzling cases-- but there just didn't seem to be enough about this oftentimes brilliant man to warrant my coming back for more.

All this makes it sound as though I did not enjoy the book. On the contrary-- I enjoyed it a lot. As the story gradually unfolds and I learned how deeply involved Eva is in every facet, I had to know more about this self-absorbed woman. At book's end I could only shake my head in disbelief (and admiration) at how well Fossum put this intricate plot together. And-- having already become familiar with Sejer, his personality and his deductive methods-- I could only admire him, too. I'm just glad I didn't read this book first.