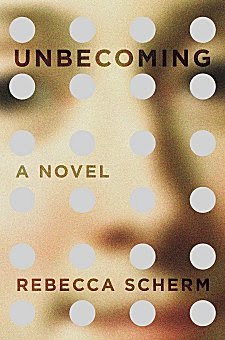 Julie's from California, in Paris working in a shop to restore all sorts of things like teapots, boxes and jewelry. But there's a problem. Her name is actually Grace, she's from Garland, Tennessee, and every night she checks the internet for news of two young men who are going to be released from prison soon. One of the men is her husband. The other man she's in love with. Both were sent to prison for a robbery that she planned to the last detail, and while the two were committing it, she was on a plane to Prague with a stolen canvas in her suitcase. Once these men are free, Grace knows that her waiting game will really begin, and her meticulous construct of lies and deceit will inevitably be shattered.

This is a novel that I tried very hard to like, but in the end I just couldn't. Unbecoming comes wrapped up in all sorts of "hints" and "echoes": Hitchcock (well, one of his movies is mentioned a couple of times), Highsmith (I do see the connection between Tom Ripley and Grace), and Gillian Flynn, who's currently flavor of the month. Perhaps I should've heeded my inner alarm when I saw Flynn's name because I couldn't get past the first twenty-five pages of Gone Girl. I didn't pay attention; however, and I had to force myself to finish this book.

Unbecoming is also labeled a "heist novel," but it isn't really. The robbery is alluded to many times, but it's never really talked about in any detail until the end of the book. Instead almost the entire novel is a very slow and meticulous look into the metamorphosis of Grace. Grace, who started out as a lonely but very likable child looking to be loved, to be a part of a family. As the years pass, she becomes enmeshed in the life of her chosen family, becoming chameleon-like in an attempt to be accepted.

Most of Grace's attempts to belong involve some sort of lying or deception, and although I'm the farthest thing from being an ultra-conservative moralist, I just couldn't empathize with her. Neither could I empathize with Riley, since he came from a family with a bit of money and he coasted through his life without really thinking about anything very much-- especially consequences. The only character I could muster up some empathy for was Alls, the boy with the father everyone in town whispered about, the boy who had no money and had to work for every single thing he had. I could empathize with Alls, but I never grew to like him.

The incredibly slow pace of the novel and its characters were killers for me, but there were things I liked about Unbecoming. For me the book came to life whenever Scherm described the work Grace did to restore items in the shop in Paris. Both the items she worked on and Grace herself seemed to glow, and I swiftly began to look forward to these scenes.

I also appreciated the very intricate plotting of the book, which was skillful even if I didn't like the story. Grace is also one of the most nuanced characters I've encountered in a long time. It's just a shame that I didn't like her and grew tired of her slow unveiling.

All in all, Unbecoming just wasn't my cup of tea, but that certainly doesn't mean that it can't be yours.