The Maharani's Pearls by Charles Todd 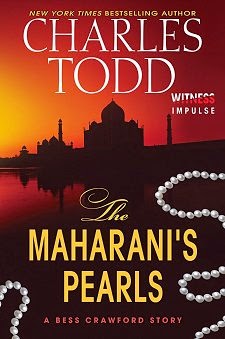 First Line: "Bess, for God's sake, what are you doing?"

The Maharani is coming for tea, and Simon finally finds ten-year-old Bess Crawford having her fortune told in the marketplace of a nearby village. Bess is unwilling to leave, since she wants to be told if romance and adventure are in her future, but when the seer only tells her of impending danger, Bess allows Simon to take her home.

The Maharani's visit isn't the usual social call. Her husband has political enemies, and she's come to ask Major Crawford for help. It's only as the Maharani is leaving that Bess thinks of what the seer told her. There's something not quite right about the Maharani's entourage, and when Bess tells her father what she's seen, Major Crawford has to hope that he and his men can get to the Maharani in time. But that's not the only danger the fortune teller has foreseen....

This little short story is an excellent addition to Charles Todd's Bess Crawford series. We get to see Bess as a curious, brave and smart little girl-- a ten-year-old miniature of the woman she will become-- and we can also appreciate the younger versions of her parents. Simon, once again, remains pretty well hidden in the shadows so I'm hoping that one day soon the spotlight will turn on him.

There's one thing that may strain many readers' credulity: at a moment of extreme danger, soldiers believe everything that Bess tells them and then allow her to put herself in the line of fire. I have to admit that this did strain my own suspension of disbelief a bit, but I handled it. These soldiers under the command of her father are well acquainted with Bess and would know that she's a level-headed, intelligent child. I can see them paying attention to what she has to say. As for them letting her put herself in danger... I really don't think they could've stopped her short of hog-tying her and locking her in a windowless shed. All readers of the Bess Crawford series know that she's unstoppable when she's doing something she passionately believes is right.

This short story is only available for digital download, and the length is given as 96 pages. Be warned. The story is only half that. The remainder is a preview of Charles Todd's upcoming book. I know these "digital shorts" aren't everyone's cup of tea-- especially if you don't have an eReader-- but I enjoy them. The ideas may not be long enough for a traditional novel, but they provide additional insight into characters that I've come to love.