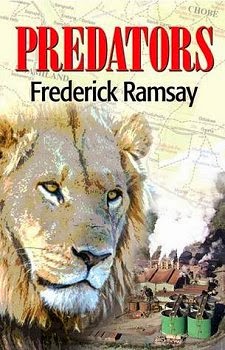 First Line: The lion blinked and shifted its weight to one side, hoping the dull pain that deprived him of sleep would abate. It didn't.

The U.S. State Department has asked Leo Painter, CEO of a large mining, energy, and real estate business, to travel to Botswana. Both Leo and his country would love to access Botswana's resources, but the CEO also has another dream: building a resort and casino on Botswana's Chobe River. It remains to be seen if Painter's business partners will allow him to do so.

This standalone by Frederick Ramsey shows the ruthlessness of the business and animal worlds with two storylines. One is of Sekoa, an old, ill lion who's been supplanted as the alpha male of his pride by a younger, stronger male. As Sekoa fights for survival, he's shadowed by a pack of hyenas that is waiting for him to make one mistake. The second storyline involves Leo (the Lion?) Painter, an old Chicago businessman with a weak heart, who has his own pack of human hyenas: his stepson, his stepson's wife, and various business associates. Ramsay shows that one world is every bit as deadly as the other just as he also shows us that Sekoa and Leo aren't as bad as we'd originally thought.

Botswana comes out as the real winner in Predators. It's portrayed as one of the least corrupt countries in the world, and rightfully proud of that fact. It's a jewel of great price and great natural wealth being circled by packs of hyenas (with names like Russia and America) just waiting to strike. I loved the setting and the wildlife depicted in this book. The people of Botswana are shown putting up with the idiocy of tourists because at this point in time tourism is the major source of their livelihood. But once these people are "off the clock," they have their own lives and their own customs.

For me, the best characters in the book were Sekoa the lion and Sanderson the game ranger. I was hoping for a different outcome for that noble old lion even though I knew it wasn't realistic. Sanderson has difficulties in her own life. Her son is dying of AIDs, just like her beloved husband did. She fears for her daughter, eyeing any young man her daughter favors with great suspicion. But what can she do, other than to slip condoms in her daughter's purse and to try not to nag? Sanderson is level-headed and thinks well on her feet, which is good because she is working a man's job and has to outmaneuver the dated way of thinking of her male counterparts on an almost hourly basis. In my opinion, Sanderson is worthy of her own series.

But of all the things I enjoyed about this book, it's Leo Painter and his crew that ultimately knocked the scales out of balance. Between acolytes and family, it was a surfeit of dishonesty, double-dealing, greed, stupidity, and bimbosity. I had to fight the urge to skip the sections dealing with Painter and Crew so that I could focus on Sekoa and Sanderson instead. Ramsay added occasional flashes of humor in Leo's sections that fell flat for me. Perhaps if I hadn't been so disgusted by these Chicago invaders, I would have appreciated the humor more. There's a lot to like about Predators. I just wish I'd been tough enough to deal with the human hyenas.